Quick Guide to Types of Whiskey 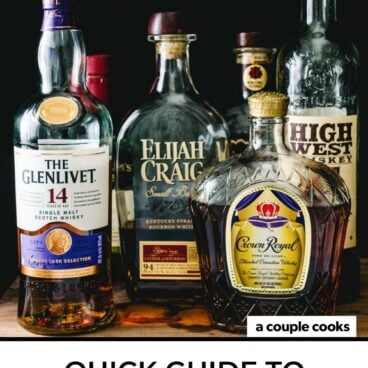 Here’s what to know about the major types of whiskey! Learn the basics of bourbon, rye, Scotch, and Irish whiskey, and how to drink them.

There are so many types of whiskey, it’s hard to know where to start! What’s the difference between a rye vs bourbon? Bourbon vs Scotch? What’s the best whiskey for drinking straight, and what are the best cocktails for a specific type of whiskey? I’ll admit: this category had me overwhelmed until we spent years mixing up the best cocktails with each type. Here’s all the basics about whiskey (or, whisky…we’ll get to that).

Whiskey is a family of distilled liquor made by fermenting grain mash: wheat, rye, barley or corn. It’s then aged in wooden barrels, usually made of oak. Whiskey is the correct spelling for American and Irish-made whiskey, and whisky is the spelling for the Canadian, Japanese, and Scottish-made versions. There are several major types of whiskey:

Many of the types above may offer blended whiskey: a whiskey that’s a blend between one or more types, which is generally a lower-priced option. Single barrel whiskey or single malt (for Scotch and Irish whiskey) is a premium type of whiskey that comes from an individual aging barrel or a single distilled grain.

Bourbon whiskey is a specific type of American whiskey that is made from at least 51% corn and aged in oak barrels. The name bourbon comes from Bourbon Country, Kentucky: the region where the spirit was invented. Today over 95% of the bourbon produced is made in Kentucky.

Rye whiskey is a type of whiskey made with a majority of the grain rye. This term refers to either American rye whiskey, made of at least 51% rye mash, or Canadian whisky, which may or may not contain rye. Canadian regulations don’t require it to contain rye, though historically it did.

Scotch is whisky made in Scotland from either barley or a mix of grains. There are several types of Scotch: the most common are Single Malt Scotch, a whisky that’s from one distillery from a mash of malted barley, and Blended Scotch, made by blending barrel-aged malt whisky and grain whisky.

Japanese whisky is a style of whiskey developed and produced in Japan. It’s closest in flavor and production method to Scotch whisky. This similarity is also why the Japanese version is spelled “whisky” instead of “whiskey.” If you like a good Scotch, you’ll love Japanese whisky.

How to drink whiskey

What’s the best type of whiskey to sip on? Traditionally connoisseurs sip on a single barrel or single malt whiskey, and save a blended whiskey for cocktails. The longer the whiskey is aged, the more premium the product (and more expensive). But really anything goes when it comes to sipping on the stuff. Here’s how to drink whiskey straight:

Here’s the oldest cocktail there is, the Old Fashioned! The classic method uses a sugar cube, bitters, and any type of whiskey for a truly timeless drink.