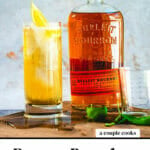 Rye vs bourbon: what’s the difference? Here’s a quick guide to the main differences between these types of whiskey (and some cocktails!).

Rye vs bourbon: what’s the difference? These two types of whiskey are both very popular, but they have major differences in flavor. Which is commonly mixed into a Manhattan vs an Old Fashioned? Which is better? Here’s a breakdown on the technical differences, tasting notes, and of course: a few popular cocktails that use each one!

Rye vs bourbon: what’s the difference?

The technical difference between rye whiskey vs bourbon is in its production method, which results in a difference flavor for each type.

The flavor: what does rye taste like vs bourbon?

But the more important question is: what are the flavor differences between rye whiskey vs bourbon? In general, rye is known for its spicy finish and bourbon is a little sweeter and rounder. Of course, this does vary based on brand! We’ve tasted a bourbon was grassy and grain-forward, followed by a rye that was bright with a sweeter body.

What’s the difference vs Scotch? Read more at Bourbon vs Scotch.

What cocktails feature rye whiskey vs bourbon? There are many whiskey cocktails that call for either type, but some are specific to rye and bourbon. Here are a few of the most popular in each category:

Here are the most popular rye whiskey cocktails where its spicy flavor shines:

The Whiskey Highball is a great way to taste the differences between rye whiskey and bourbon. Scroll down for the recipe!

Here’s how to make the classic whiskey highball: tall, bubbly, and all about the spirit! This cocktail is a refreshing way to enjoy your favorite whiskey, whether it’s rye or bourbon.