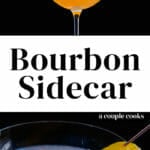 The Bourbon Sidecar is bright and classy, a variation on the classic sour cocktail that swaps brandy for bourbon. Citrus forward with a spicy whisky finish!

Love sour cocktails but want to change up your whiskey sour? Try this Bourbon Sidecar! The Sidecar is one of the most classic of all sour cocktails. Change the brandy to bourbon, and you’ve got a whole new drink! This one trades the fruitiness of brandy for the spicy sweet finish of bourbon whiskey. Alex and I are big whiskey sour fans, but we love changing it up with the Sidecar: it’s even more refreshing and citrus forward than its cousin cocktail. Here’s how to make it!

What’s in a bourbon Sidecar?

The bourbon Sidecar is a variation on the classic Sidecar, one of the great sour cocktails. It was invented in the 1920s, and the name likely came from an American army captain who drove around in a motorcycle sidecar. The Sidecar is on the list of International Bartender Association’s IBA official cocktails, meaning that there’s an “official” definition of the Sidecar. Swap out the brandy and you’ve got the bourbon version! Here are the ingredients for a bourbon Sidecar:

How to make a bourbon Sidecar (basic steps)

The bourbon sidecar is very easy to make: even easier than a classic because it skips the sugar rim! Here are the basic steps:

Triple Sec is often the orange liqueur used in a sidecar. But we recommend using Cointreau! Cointreau has a orange perfume flavor that’s well balanced between bitter and sweet, while Triple Sec can be more harsh.

What’s Cointreau used in? So many great cocktails! Grab a bottle and you can make a long list of Cointreau drinks: the Classic Margarita (and our best Margarita Recipes), Cosmopolitan, Mimosa, and more.

Add rum & make it a Between the Sheets

Add rum to the bourbon sidecar and it becomes a classic cocktail called Between the Sheets! A spin on the classic Sidecar, it features rum and Cognac together: something that in Prohibition times was thought to be a little naughty. The rum adds nuance to this citrusy drink. Between the Sheets a classic cocktail that makes it onto the International Bartender Association’s IBA official cocktails: so this variation is a classic in itself!

Related drinks to the bourbon Sidecar

Turns out there are lots of drinks that are variations on a theme! The citrus

When to serve a bourbon Sidecar

The bourbon sidecar is a classy and refreshing cocktail that works anytime and any season! It’s perfect for sipping as a:

The Bourbon Sidecar is bright and classy, a variation on the classic sour cocktail that swaps brandy for bourbon. Citrus forward with a spicy whisky finish!

*Or use 1 ounce rum and 1 ounce bourbon to turn it into the classic Between the Sheets cocktail.

Sour cocktails are a family of cocktails with base liquor, sour, and sweet elements. There are all sorts of variations on a good “sour”. Here are some of our favorites: