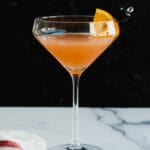 The Ward 8 is the classic whiskey cocktail you need! A riff on the whiskey sour, it features rye, orange and grenadine.

Here’s a classic whiskey cocktail that flies under the radar: the Ward 8! This riff on the whiskey sour needs reviving, in our opinion. Where the whiskey sour can be on the sweet side, the Ward 8 is perfectly balanced and tart. It features rye whiskey, but it’s not overpowering: there’s just a hint of spice on the finish. Add sweet orange juice and bright red grenadine for sweetness and color, and it’s a super balanced and intriguing drink! It’s one of our favorite undiscovered whiskey drinks! Here’s how to make it.

The Ward 8 cocktail is a rye whiskey cocktail invented in 1898 in Boston, Massachusetts. It’s a spin on the whiskey sour, using rye whiskey, lemon, orange and grenadine. What’s with the name? The cocktail was created to celebrate a man named Martin Lomasney’s election to state legislature, and the city’s Ward 8 district helped clinch the win. Today Martin is all but forgotten, but the drink made in his honor remains!

The Ward 8 is not a popular classic whiskey drink, but we think it deserves a revival. It’s more intriguing than a whiskey sour, with a tart flavor from two citrus juices and the pomegranate zing of grenadine. In fact, I’m not a huge rye whiskey fan but I love this drink! Here’s what you need to make it:

What rye whiskey to use

Rye whiskey is a type of whiskey made with a majority of the grain rye. This can be either American rye whiskey, made of at least 51% rye mash, or Canadian whisky, which may or may not contain rye. Rye whiskey is known for its strong, spicy flavor, versus bourbon whiskey which is much sweeter.

Grenadine is another key component to the Ward 8. This bright red syrup brings a hint of rosy color to the drink, though it’s not so much to make it a pink drink! Here’s what to know about this popular syrup:

How to make a Ward 8 cocktail: shake and strain!

The Ward 8 is easy to make, once you’ve compiled the rye whiskey, grenadine, orange and lemon juice! All you’ll need is a cocktail shaker.

And that’s it! Let us know if you try the Ward 8 cocktail. It’s tart, refreshing, and a great

When to serve a Ward 8

The Ward 8 is a classy cocktail that works for anytime! It’s great for sipping as a:

The Ward 8 is the classic whiskey cocktail you need! A riff on the whiskey sour, it features rye, orange and grenadine.