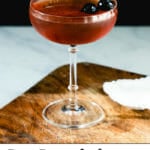 The La Louisiane cocktail is an improvement on the Sazerac! Absinthe, rye whiskey and vermouth make this spirit-forward cocktail a stunner.

If you love spirit-forward drinks like the Sazerac or a Manhattan: this one’s for you. The La Louisiane cocktail! This unique mixed drink is a classic cocktail from the 1800’s that most people have never heard of. It’s a lot like a Sazerac: but better. How? Well, it’s rounded out with more complexity in flavors: it’s herbal from Benedictine and lightly sweet from vermouth. And of course there’s absinthe, the historically banned liquor that adds a black licorice finish to each sip. This one’s something special: here’s how to whip one up.

The La Louisiane is a cocktail that hails from New Orleans, made with rye whiskey, absinthe, vermouth and Benedictine. The exact date La Louisiane appeared is unknown, but it was likely invented between 1880 and 1912, when absinthe was banned. It began as the house cocktail of the Restaurant La Louisiane in New Orleans.

You’ll also find this cocktail called De La Louisiane or Cocktail à la Louisiane. It’s very boozy, with a round, complex and strong flavor. The ingredients in the La Louisiane cocktail are:

Let’s talk through a few of these ingredients, shall we? The rye whiskey is pretty self explanatory. But Benedictine? Absinthe? Let’s get mixing.

The skinny on absinthe: is it worth buying?

So…absinthe. Is it part of your liquor cabinet? We’ll admit: it has a bad reputation. In fact, in our hundreds of cocktail recipes, we had been putting off grabbing a bottle of the stuff. Mostly it’s because it’s a niche spirit, but lingering in the back of my mind was: wasn’t it illegal at some point? Wasn’t it some kind of drug in the early 1900s? Don’t worry: absinthe is perfectly safe consumed in moderation. Here’s what to know:

What is Benedictine, exactly?

Here’s the thing. With the La Louisiane you need not just one but two specialty liqueurs. (Well, and special bitters!) So what’s Benedictine?

Benedictine is an herbal liqueur made in France. It’s made with 27 different herbs, flowers, berries and spices, and was invented in the mid 1800’s. It’s sweetened with honey, and the flavor is lightly sweet and spiced. Benedictine is used in a few classic cocktails: the Singapore Sling and the Vieux Carre. It should be fairly easy to find at your local liquor store.

And what are Peychaud’s bitters?

The last specialty ingredient you need for the La Louisiane cocktail: Peychaud bitters! What are they, and how are they different from Angostura bitters?

How to make a La Louisiane cocktail

Once you’ve gathered up all the ingredients, making the La Louisiane cocktail itself is a breeze! Here’s how to make it:

There are a few drinks that are very similar to the La Louisiane that have a similar birth place: New Orleans! Two popular New Orleans cocktails have marked similarities:

When to serve a La Louisiane cocktail

The La Louisiane is a sophisticated and spirit-forward cocktail. Only serve it to people who love boozy drinks! It’s perfect for sipping as a:

The La Louisiane cocktail is an improvement on the Sazerac! Absinthe, rye whiskey and vermouth make this spirit-forward cocktail a stunner.