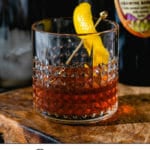 Here’s a boozy classic cocktail that’s one of the greats: the Sazerac! If you love spirit-forward drinks like the Old Fashioned, this one’s for you. Instead of just whiskey and sugar, this one’s got a surprise element: absinthe gives a black licorice finish to each sip! This outlawed liquor is now back in good graces (since 2007, at least), a reason to try this famous slow sipper. It’s the official drink of New Orleans and one of the oldest cocktails there is.

The Sazerac is a low ball cocktail made with Cognac or rye whiskey, absinthe, and Peychaud’s bitters. The exact history of the drink is murky, but it was invented in New Orleans in the mid-1800’s. Some sources state the Sazerac was invented as early as 1838 by apothecary Antoine Peychaud. Others claim that the owner of the Sazerac Coffee House, Aaron Bird, created the drink in the 1850’s. The name comes from the type of Cognac it was originally made with, Sazerac-de-Forge et Fils. Later rye whiskey was used in place of the Cognac, and cocktails today use either or both.

This cocktail is on the list of International Bartender Association’s IBA official cocktails, meaning that it has an “official” definition. The ingredients in a Sazerac are:

Make it with Cognac, rye whiskey, or both

The first Sazerac cocktails were made with Cognac: a brand name called Sazerac. Around the 1870’s, rye whiskey replaced the Cognac because of a pest that devastated vineyards in France. Today it can be made with either liquor: or both! The official IBA cocktail version uses rye whiskey, but many sources claim it should be made with Cognac.

For the best flavor, use both! We had Cognac on hand from making the Sidecar and other Cognac cocktails, and we love the flavor combined with the spicy rye whiskey. (Plus, Cognac is the most traditional.) But if all you have is rye whiskey, just substitute it for the Cognac! You can also use bourbon to make a Bourbon Sazerac.

Was absinthe illegal? Is it worth buying today?

So…absinthe. It’s got a bit of a history. In fact, it was illegal in the US for almost 100 years! Famous painters like Degas, Manet and Picasso have even immortalized it in their paintings. But don’t worry: today, scientists have determined that absinthe is perfectly safe consumed in moderation. Bartenders in New Orleans used substitutes during the ban, but today you can make the Sazerac with the real thing. Here’s what to know about this special spirit:

What are Peychaud’s bitters?

Another specialty ingredient you need for the Sazerac; Peychaud bitters! Bitters are liquors made with herbs and spices. They add intrigue and complexity to cocktails. Peychaud bitters are the “secret” recipe that was originally used to make a Sazerac…and they’re still made today! Here’s a bit more about this ingredient:

How to make a Sazerac cocktail

Most bartenders make the Sazerac in a special way: with 2 chilled low ball glasses. They swirl the absinthe in a chilled glass, and then use the other glass to mix and chill the remaining ingredients that they strain back into the absinthe glass. After extensive taste testing, we found that for the home bartender, this isn’t really necessary. While a purist might insist on it, we found it was just as good simply stirred with absinthe in a mixing glass. Here’s what to do:

The Sazerac is the official New Orleans cocktail, according to a decision by the Louisiana Legislature in 2008. But there are plenty of other famous drinks associated with this city! Here are a few more New Orleans cocktails you should try, and the first two are related drinks to the Sazerac:

When to serve a Sazerac

The Sazerac is a boozy cocktail that’s great for Cognac, rye, and Old Fashioned lovers. It’s perfect for sipping as a: