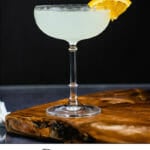 The Corpse Reviver No 2 recipe is a classic cocktail that’s crisp, tart and perfectly balanced! It’s one heck of a drink…just as unique as its name.

Here’s a classic cocktail that’s as unique as its name…the Corpse Reviver No 2! To be honest, we were a little wary of this cocktail at first because of its moniker. But it turns out that the Corpse Reviver has nothing scary or ghoulish about it. In fact, it’s damn good. It’s a classic gin sour cocktail that’s tart and zingy from lemon juice and orange liqueur, with a hint of licorice on the finish. It’s truly a stunner…and the name will impress all your friends. Let’s get mixing!

What’s a Corpse Reviver No 2?

So, why is it called a Corpse Reviver? The Corpse Reviver is a family of cocktails with a humorous name: indicating the strength of the drink was enough to bring a body back from the grave. The most famous Corpse Reviver that’s still popular today is Corpse Reviver No 2. This drink was printed in the renowned Savoy Cocktail book from 1930. It’s a classic gin sour cocktail, a mixed drink made with liquor, citrus, and sweetener. In fact, the drink is very similar to the makeup of a Margarita or Sidecar (we’ll get to that below).

This cocktail is on the list of International Bartender Association’s IBA official cocktails, meaning that it has an “official” definition. The ingredients in a Corpse Reviver No 2 cocktail are:

Let’s talk through a few of the more interesting ingredients, shall we?

Should you use dry vermouth or Lillet Blanc?

One unique element of the Corpse Reviver is the addition of dry vermouth or Lillet Blanc to the basic formula of a sour cocktail. The original drink was made with Kina Lillet, a wine-based aperitif similar to vermouth that is no longer made (production stopped in 1986). These days, here’s what’s you can substitute:

What is absinthe? Is it worth buying?

Arguably the most unique ingredient in the Corpse Reviver is…absinthe. And it has a bit of a history. In fact, it was illegal in the US for almost 100 years! Famous painters like Degas, Manet and Picasso have even immortalized it in their paintings. But don’t worry: scientists of today have determined that absinthe is perfectly safe consumed in moderation. Here’s what to know before grabbing a bottle of this special spirit for a Corpse Reviver:

How to make a Corpse Reviver No 2

Got all those ingredients? After that, it’s quick and easy to make the Corpse Reviver No 2:

Variations on the Corpse Reviver

Want to add a little spin on a Corpse Reviver? Here are a few quick variations to get your wheels turning:

Another drink with a macabre name? Try the Zombie.

Because the Corpse Reviver is a classic sour cocktail, it’s related to lots of well known drinks. Here are a few that are very similar:

When to serve a Corpse Reviver cocktail

The Corpse Reviver cocktail is a classy classic sour that’s zingy and unique. It’s perfect for sipping as a:

The Corpse Reviver No 2 recipe is a classic cocktail that’s crisp, tart and perfectly balanced! It’s one heck of a drink…just as unique as its name.

*The most classic liquor here is Cocchi Americano, if you happen to have it.