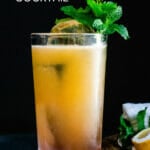 You’ll need ten Zombie cocktail ingredients to make this drink, but it’s worth it! This fun rum cocktail is tropical, fruity…and potent.

Here’s a rum cocktail that’s completely over the top…but worth it if you’re an adventurous home bartender. Meet the Zombie cocktail! This drink packs a potent punch, with four types of rum, three fruit juices and two fruit syrups. It’s totally unnecessary…but then again, that makes it more fun! While it’s got a 1970’s vibe, this cocktail actually comes from the 1930’s and was one of the first of its kind. Here’s what you need to know about the special ingredients and how to whip up this special mixed drink!

History of the Zombie cocktail…it’s older than you think!

The Zombie cocktail is a mixed drink made with various types of rum, fruit juices and syrups. With the tropical tiki rum drink vibe, you might think it was a 1960’s or 1970’s drink. But it was invented in 1934 by a Donn Beach at his Hollywood restaurant called Don the Beachcomber.

The story goes that Donn invented the drink for a hung over customer to get through a business meeting. The customer later complained the drink was so strong, it turned him into a “zombie.” The concept reminds us of the Corpse Reviver, a drink so strong it would revive someone from the dead…but the opposite!

The recipe for the Zombie cocktail was kept secret through the years. Many restaurants and bars tried to copy it, and it became popular at tiki restaurants. (Since Tiki culture is built on appropriation, we won’t exalt the virtues of that phenomenon!) The Zombie went on to became such a standard that it’s now on the list of International Bartender Association’s IBA official cocktails! This means that it has an “official” definition.

However, the original recipe has some very unique ingredients that are very hard to find: Pernod, falernum, and Donn’s mix (grapefruit and cinnamon syrup). Because of this and because there’s a wide variation in the way bartenders make a Zombie, we put our own spin on the drink using common substitutes. The Zombie cocktail ingredients list is one of the longest of any of the popular cocktails. You’ll need:

Let’s talk through some of the ingredients, shall we?

This is the only rum cocktail we’ve made that calls for a whopping four types of rum! Most rum drinks use white rum, aged rum (also called golden), or dark rum. But the Zombie calls for two other types: spiced rum and 151 rum, though the former is optional. Here’s a bit more about these types of rum:

Unlike white, aged and dark rum, aren’t many other cocktails that use spiced and 151 rum. They’re definitely a special purchase for the Zombie cocktail!

The fruit juices in the Zombie cocktail are easy to find: buy a lime, a lemon, and a jar of pineapple juice. But the syrups are where things get interesting! The most unique non-alcoholic ingredient in the Zombie is passion fruit syrup. Here’s what to know about this special ingredient:

Lastly, you’ll need grenadine to make a Zombie cocktail! Luckily this ingredient is much more common. In our opinion, you could leave this one out without destroying the character of the drink. But

How to make a Zombie cocktail

Phew, that was a lot of ingredients! Once you’ve compiled everything, it’s smooth sailing. It just takes a while to measure out the 10 ingredients. Shake them up, then float the grenadine and rum. Here’s what to do:

When to serve a Zombie

The Zombie cocktail is a festive and fun drink, great for parties or impressing guests! It’s great as a:

You’ll need ten Zombie cocktail ingredients to make this drink, but it’s worth it! This fun rum cocktail is tropical, fruity…and potent.