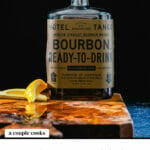 What’s the difference between bourbon vs whiskey? Here’s a quick guide to what you need to know about this style of liquor.

What’s the difference between bourbon and whiskey? Here’s the key: bourbon is whiskey, but not all whiskey is bourbon. Whiskey is a family of distilled liquor, and bourbon is a specific type of American whiskey. Keep reading for a few things you may not know about this distilled spirit. We’ve also got lists of the best whiskey cocktails and bourbon cocktails to test out your newfound knowledge. Let’s get started!

Bourbon vs whiskey: what’s the difference?

Should you make a a whiskey sour, or a bourbon sour? Is it spelled whiskey or whisky? Here’s a quick breakdown of what you need to know!

The more important question is: what are the flavor differences between bourbon vs whiskey? Of course, bourbon is whiskey. But what distinguishes bourbon in flavor compared to other types of whiskey?

Here are the most popular whiskey cocktails where you can use various types of whiskey:

This easy whiskey sour recipe is perfectly balanced and so easy to make! Garnish with an orange peel and a cocktail cherry.