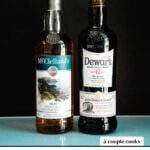 Scotch vs whiskey: what’s the difference? And what about whisky? Here’s a quick guide to what you need to know about this style of liquor.

Scotch vs whiskey: what’s the difference? Well, Scotch is whiskey, but not all whiskey is Scotch. Confused? Even more confounding, this special type of whiskey is really spelled “whisky.” Here are a few things you may not know about this spirit, as well as some of the best Scotch cocktails that highlight its distinctive flavor. Let’s get started!

Scotch vs whiskey: what’s the difference?

Alright, let’s break it down. What’s Scotch and what’s whiskey? Is it spelled whiskey or whisky? Here’s a quick bulleted breakdown of what you need to know:

What does Scotch taste like, vs other types of whiskey?

Let’s get to some examples of cocktails! Of course, you can drink Scotch or whiskey straight up. But we prefer it mixed into drinks! Keep in mind, Scotch cocktails are considered whiskey cocktails because it’s a type of whiskey, but not all whiskey cocktails are Scotch cocktails. In fact, if a cocktail calls for “whiskey,” we don’t recommend using a Scotch unless the recipe specifically calls for it. Scotch has a very distinct flavor and it’s usually called for specifically in a cocktail recipe.

Some of the most popular Scotch cocktails are:

Got other types of whiskey? Here some popular whiskey cocktails:

The Rob Roy drink is a Manhattan made with Scotch whisky! This booze-forward cocktail is a sophisticated way to enjoy a good Scotch.