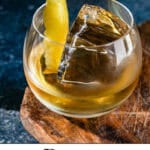 The Rusty Nail is a Scotch and Drambuie cocktail that’s got the 1960’s written all over it! We put a little shine on this classic slow sipper.

Scotch lovers, this one’s for you! Here’s one of the most famous Scotch cocktails of them all: the Rusty Nail. This slow sipper got popular in the 1960’s, pairing whisky with Drambuie, a Scotch-based liqueur. All you need is two ingredients and you get lots of flavor: honey, herb and sweet notes from the Drambuie, and a spicy finish from the Scotch. If you like spirit-forward drinks like the Old Fashioned or Manhattan, this one will be right up your alley.

What’s in a Rusty Nail?

The Rusty Nail was born back in the 1937 at a British Industries Fair and was dubbed the BIF. Then it disappeared into history, only to reappear in the 1960’s as the “in” drink of the moment. Just as mysterious is the drink’s name: no one seems to know where Rusty Nail came from. Some think it was named after the rusty nails on the crates of Drambuie, others say a bartender actually stirred the drink with a rusty nail. (Highly unlikely!)

Whatever the case, this drink is actually a classic cocktail on the list of International Bartender Association’s IBA official cocktails, meaning there’s an “official” definition. The ingredients in a Rusty Nail are:

How to make the best Rusty Nail

Some people say that you can make a Rusty Nail with equal parts Scotch and Drambuie. Wrong! This makes for a sickly sweet drink that’s a little too overpowering. (A classic 1970’s cocktail move.) Here’s what we recommend for making the very best Rusty Nail:

What is Drambuie, anyway?

That’s what I asked Alex when he told me we were making a Rusty Nail. The bottle says “The Isle of Skye Liqueur,” which certainly sounds intriguing. What is it, and is it worth springing for a bottle? Here’s a breakdown:

Don’t want to buy a bottle of Drambuie? We don’t blame you! Here are a few other Scotch cocktails you can make instead:

When to serve a Rusty Nail cocktail

The Rusty Nail is a slow-sipping Scotch cocktail. It’s great for serving as a:

The Rusty Nail is a Scotch and Drambuie cocktail that’s got the 1960’s written all over it! We put a little shine on this classic slow sipper.