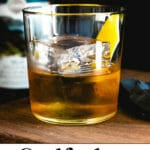 The Godfather cocktail is a simple Scotch and amaretto drink that’s full of flavor! It pairs nutty sweetness with a spicy whiskey finish.

Here’s a drink for Scotch lovers and drinkers who need a little extra convincing. Try the Godfather cocktail! This Scotch and amaretto cocktail is deliciously simple. With just two ingredients, it balances the nutty sweetness of amaretto with the spicy finish of whiskey. The hint of amaretto gives the Scotch a unique intrigue that makes it more palatable than drinking straight up. For a non-Scotch lover like me, it’s the perfect intro-to-Scotch cocktail.

The Godfather is a two-ingredient cocktail made with Scotch whiskey and amaretto. The history around the drink is a little mysterious: no one knows who invented it. But it became popular in the 1970’s when cocktails were strong and sweet (and often included amaretto). It’s believed to be named after the Godfather movie with Marlon Brando, which came out in 1972. Marlon Brando’s character often drank Scotch in the movie, the Godfather name could be referencing the addition of the Italian liqueur.

Whatever the case, here are the ingredients you’ll need to make a Godfather cocktail:

How to make a Godfather

Like most two ingredient cocktails, the Godfather is ultra simple to make. You don’t even need to dirty a cocktail shaker or citrus juicer. Just stir and go! Here’s all you need to do:

Types of Scotch (& a finishing touch!)

Are you a Scotch fan? Chances are, you’ll know the Scotch you love: use whatever you have on hand! To take the Godfather cocktail over the top, we put our own special spin on it by using two types of Scotch. This is absolutely optional, but we happened to have two types of Scotch on hand after making the Penicillin cocktail. Here’s a little more about Scotch types:

The other main ingredient in the Godfather: amaretto! Amaretto is an almond liqueur that originates from Italy. It has a distinctive almond flavor, and tastes both sweet and bitter at once (amaretto means in Italian “little bitter”). It’s worth getting a bottle for your shelf: you can use it in cocktails and in cooking, especially desserts!

When to serve the Godfather cocktail

The Godfather is so easy, and it’s perfect for Scotch lovers and non-fans alike! Try it as a:

The Godfather cocktail is a simple Scotch and amaretto drink that’s full of flavor! It pairs nutty sweetness with a spicy whiskey finish.

Love your Scotch? Here are a few of the best Scotch cocktails to try: