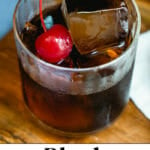 Here’s how to make a Black Russian! This coffee-flavored vodka cocktail is perfect for after dinner drinks or an afternoon pick-me-up.

Here’s a cool sweet treat in the form of a cocktail: the Black Russian! This classic cocktail from the 1950’s is the perfect after dinner drink or afternoon pick-me-up. It’s got just 2 ingredients, and almost tastes like a dessert. You might know its more popular cream-filled cousin, the White Russian. But the Black Russian is the original. We might even like it a little better. Here’s what to know!

The Black Russian is a vodka cocktail with coffee liqueur. This classic cocktail was invented back in 1949, when it was created in a hotel bar in Brussels for the American ambassador to Luxembourg (here’s more about that). So, the drink is not Russian in origin! It was named for the vodka and the black color of the coffee liqueur.

This cocktail is on the list of International Bartender Association’s IBA official cocktails, meaning that it has an “official” definition. The ingredients in a Black Russian are:

What is Kahlua, anyway?

Kahlua is pretty standard in a liquor cabinet these days, but what actually is it? Here’s what to know about this coffee liqueur, and some substitutes:

How to make a Black Russian cocktail

Once you’ve got your ingredients, this two ingredient cocktail takes only a few minutes to make. There’s one difference from the White Russian: you don’t mix the ingredients together in the glass. Instead, stir them in a mixing glass: it’s a classic stirred cocktail like the Martini. Here’s what to do:

Make it a White Russian!

Why drink a Black Russian instead of the white variation? Well, it’s healthier with less calories! Even better, we prefer the flavor and simplicity of the straight version to its creamy cousin.

More variations on the Black Russian

There are a few other riffs on the Black Russian theme that are worth mentioning! If you’re a fan of this drink, make sure to try:

Because it’s only two ingredients, the Black Russian is one of those easy cocktails you can whip out for unexpected guests. Here are some more famous two ingredient cocktails. With most of these, you don’t even need to shake them: just stir together in a glass:

When to serve a Black Russian

The Black Russian is a sweet cocktail, almost a dessert! It works before dinner, after dinner, or anytime in between. Serve it as a:

Here’s how to make a Black Russian! This coffee-flavored vodka cocktail is perfect for after dinner drinks or an afternoon pick-me-up.