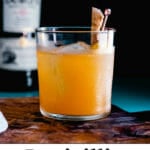 The Penicillin cocktail is a modern classic! Featuring Scotch with the flavors of honey, lemon and ginger, it’s got a unique, high-end vibe.

Are you a Scotch lover? Here’s the mixed drink for you: the Penicillin cocktail! This modern classic cocktail highlights the peaty flavor beautifully. Combining Scotch with lemon, honey and ginger makes for a sort of high-class version of the Whiskey Sour. While it pleases even non-Scotch fans (me), you’ll need two bottles of Scotch…making it a drink for die hards. Ready to get mixing?

Not a Scotch lover? Make the Gold Rush instead.

What’s in a Penicillin cocktail?

While it might sound like a hundred year old classic, this drink is anything but! The Penicillin cocktail was invented in 2005 by bartender Sam Ross at the famous Milk & Honey bar in New York City. It’s essentially a whiskey sour made with Scotch and a ginger honey syrup. The name of the drink suggests it’s a cure-all, playing off the ingredients that are common in herbal remedies (lemon, ginger and honey).

Ross took elements of the Gold Rush, another famous cocktail invented at the same bar, but swapped Scotch for bourbon and added ginger. As the final touch, he floated a single malt Scotch layer on top to add a peaty whiff to the front of each sip. It’s a strong flavor, but it’s uniquely intriguing. The ingredients in the Penicillin cocktail are:

The typical Penicillin cocktail uses a honey ginger syrup to sweeten the drink (instead of the often used simple syrup). This is a special honey syrup that’s infused with ginger. Because we already had honey syrup on hand, here’s what we did to simplify this cocktail:

How to make honey syrup

Honey syrup is simple syrup made with honey instead of granulated sugar. It’s seriously easy to whip up a batch: and it adds a rich depth to cocktails of any kind. Here’s what to do:

You’ll need two types of Scotch to make a Penicillin cocktail. They’re a bit of an investment, so if you’re not a Scotch lover, here’s your out! Go make the Gold Rush instead: it uses bourbon and has similar flavors.) Here are the two types of Scotch you need:

Editorial comment: I’m personally not much of a Scotch drinker, unlike my better half (Alex). I can’t drink Scotch neat, and certainly not grassy smokiness of peated Scotch. But the Penicillin had enough sweet and citrus to balance it out the flavors. It’s not my favorite cocktail, but I enjoyed drinking it and it’s certainly unique. For a Scotch lover like Alex, it was right up his alley.

How to make a Penicillin cocktail

Once you’ve made the honey syrup and gathered up your Scotch, the rest of the Penicillin cocktail is a breeze! All you’ll need is a cocktail shaker: no other fancy tools required! Here are the basic steps (or jump right to the recipe):

Step it up: add clear ice!

The Penicillin is best with a large ice cube that fills the entire glass. How to find that? Make clear ice! Clear ice is crystal clear ice that doesn’t have the cloudiness that normal ice has. You can also cut it into beautiful shapes that look like they’re straight out of a trendy bar. It’s easy to make: all you need is 24 hours and a small cooler. Here’s How to Make Clear Ice.

When to serve a Penicillin cocktail

The Penicillin cocktail is a cocktail for Scotch lovers only! Serve it to impress as a:

The Penicillin cocktail is a modern classic! Featuring Scotch with the flavors of honey, lemon and ginger, it’s got a unique, high-end vibe.

Love your Scotch? Here are a few of the best Scotch cocktails to try: