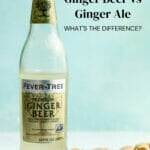 Ginger beer vs ginger ale: what’s the difference between these bubbly drinks? When to use one or the other? Here’s what you need to know.

Ginger beer vs ginger ale: what’s the difference? They’re both bubbly drinks made with ginger, but there’s a significant difference between the two. Which should you use in a Moscow mule, and which goes in a Shirley Temple or Pimm’s Cup? Here’s what you need to know!

Ginger beer and ginger ale are both bubbly ginger drinks, but they taste different and are used in different ways. Here’s a breakdown:

Ginger beer vs ginger ale: when to use them?

Both ginger beer and ginger ale can be sipped on their own, but both are also popular cocktail mixers! These non-alcoholic mixers add a lovely bubbly effervescence to drinks. While they both bring a ginger flavor, there are some major differences.

Which famous cocktails use ginger beer or ginger ale? Here are a few to try:

Try these ginger beer cocktails when you’ve got a few bottles. What are the best ginger beer brands? We like Q Ginger Beer and Fever Tree.

Most of these ginger ale cocktails also work with ginger beer. (Just don’t swap the other way around!)