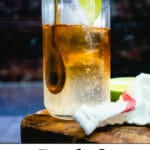 Combine ginger beer and dark rum and you’ve got the Dark and Stormy! Here’s how to make this classic cocktail…in just 2 minutes.

Just 3 ingredients make up this classic cocktail: the Dark and Stormy! This refreshing rum cocktail has quite the reputation…because it’s just that good. Each ingredient has lots of personality: the rich, earthy dark rum, with vanilla and brown sugar notes. Add to that spicy ginger beer, fruity and filled with effervescent bubbles. Top it off with a squeeze of tangy lime, and there’s not much that’s better for a hot afternoon (or anytime!). Even better: there’s no cocktail skill needed. Pour it in the glass, and drink up.

What’s a Dark and Stormy?

The Dark and Stormy cocktail is a highball cocktail made with dark rum and ginger beer, similar to a Moscow Mule with rum. The story goes that the drink was invented in Bermuda sometime after World War I, around 1918. British naval officers had been brewing up ginger beer to fight sea sickness, and in a genius move combined it with Goslings Dark Rum. (Read the full history here.)

The Gosling Brothers company has since trademarked the drink under the name “Dark ‘N Stormy,” indicating it should only be made with Goslings Black Seal Rum and their brand of ginger beer. Because of this, some bar menus use different names for this drink, like Safe Harbor.

Ingredients for a Dark and Stormy

This cocktail is on the list of International Bartender Association’s IBA official cocktails, meaning that it has an “official” definition. To skirt the legal implications, IBA calls it the Dark ‘n’ Stormy, with two apostrophes instead of one. The ingredients in a Dark and Stormy cocktail are:

Should you use lime?

Yes and no. The official definition of the Dark ‘N Stormy doesn’t have lime juice in the drink itself, but it’s garnished with lime. A lot of bartenders like to add a measured amount of lime to a Dark and Stormy to add some zip to the flavor. Using lime makes this drink even closer to a Moscow Mule.

In our opinion, the best way to add lime to a Dark and Stormy is squeezing in the juice from a lime wedge. This way, you don’t have to dirty a citrus juicer or take time to measure it out. But you get a good hit of zingy flavor from the lime squeeze.

Is a Dark and Stormy a mule?

Yes and no! A Moscow Mule is a classic cocktail made with vodka and ginger beer. There are lots of famous variations on the mule, like the Mexican Mule and Kentucky Mule. But the Dark and Stormy isn’t technically a mule because of two key differences:

That said, many sources consider a Dark and Stormy cocktail a Moscow mule made with dark rum. We’ll let you decide!

The rum to use

What type of dark rum to buy for a Dark and Stormy? Like with any drink, here’s our mantra: the better the liquor, the better the drink! We try to find a mid-price range rum, which is usually indicative of quality. Of course, if you want to be totally traditional: get Goslings Black Seal Rum.

How do you get the layers in a Dark and Stormy? Pour the ginger beer in the glass, then top off with the rum. However, make sure to stir before you drink it. Taking a sip of the layered drink will give you a hit of 100% rum: you won’t get the ginger beer flavor unless you stir.

Best ginger beer for a Dark and Stormy

The ginger beer is what has most influence on the flavor of a Dark and Stormy cocktail: even more so than the rum! You’ll want to find a brand that’s sweetened just enough, and made with real ginger. Avoid ginger beer with artificial sweeteners and flavors. Here are our favorite ginger beer brands to buy:

Got an open bottle of ginger beer? Make these Best Ginger Beer Cocktails.

While it’s got its differences, you can consider Dark and Stormy cocktail part of the Moscow mule family. There are lots of well-known variations on the Moscow mule to try:

When to serve a Dark and Stormy cocktail

The Dark and Stormy is bold, bubbly and refreshing. It’s perfect for sipping as a:

Combine ginger beer and dark rum and you’ve got the Dark and Stormy! Here’s how to make this classic cocktail…in just 2 minutes.