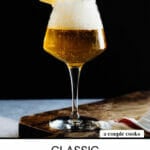 The shandy is a refreshing beer cocktail that’s easy to make at home! Pour up this low alcohol drink in warm weather or anytime.

When it comes to beer cocktails, there’s nothing better than a shandy! This tasty low alcohol drink originated in Europe and has swept the nation. Here’s the thing: this concept was not invented by Leinenkugel. This drink has a history of hundreds of years! It’s so easy to make at home with your favorite beer and ginger ale or ginger beer. Here’s more about the history of this refreshing drink and how to mix it up at home.

A shandy is a European beer cocktail, invented in Britain in the mid-1800’s. The original name was shandygaff, which refers to a beer mixed with ginger beer or ginger ale. Today it’s very popular in Europe, Australia and New Zealand, Canada, and is sometimes known as the French name Panaché. Here are a few things to note about the shandy:

How to make a shandy

There’s lots of variation for the mixer with the beer in a shandy! You can use ginger ale or ginger beer to make the classic old school version, or lime lime soda (like Sprite) or sparkling lemonade for a summer version. To make a shandy, mix together equal parts:

For this classic version, we used a pale ale and mixed it with the traditional option of ginger beer. It makes for a balanced and more moody shandy than the summer shandy, which is lighter and more citrusy. Speaking of…

There are a few variations on the shandy that have become popularized via the Leinenkugel brand. But you can easily make them at home: and they taste so much better homemade! Here are our favorite variations:

Step it up: add cocktail bitters

Shandy purists may disagree with this idea: and that’s ok! The shandy is a laid back drink that’s all about ease and straightforward flavor. But if you want to step it up a little bit: try adding a few dashes of cocktail bitters!

We added a few dashes of Angostura bitters here, because we love adding bitters to just about anything (including soda water to make a low alcohol cocktail). It adds intrigue and complexity to this basic drink! Let us know what you think about this idea in the comments below.

And that’s it: how to make a shandy! Let us know if you try it and what you think. And ,there are so many other great ways to mix beer into a tasty cocktail! Here are some more beer cocktails to try:

When to serve a shandy

This beer cocktail is great for summer…or anytime! Drink it as a:

The shandy is a refreshing beer cocktail that’s easy to make at home! Pour up this low alcohol drink in warm weather or anytime.