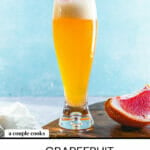 The grapefruit shandy is the most refreshing, citrusy beer cocktail! This drink is at its best homemade with a few simple ingredients.

Sure, you can buy grapefruit shandy at the store…but have you ever had one homemade? The shandy is a beer cocktail with hundreds of years of history. Nope, this concept was not invented by Leinenkugel! Adding a mixer to your beer is a concept that goes back centuries. The grapefruit shandy is a spin on a shandy using fresh squeezed juice or soda, and it comes out beautifully refreshing: perfect for summer sipping! Here’s how to make it at home.

A shandy is a European beer cocktail invented in Britain in the mid-1800’s. The word come from the name shandygaff: the term for beer mixed with ginger beer or ginger ale. It’s popular in Europe, Australia, New Zealand, and Canada, and is sometimes known as the French name Panaché. Here are a few things to note about the shandy:

How to make a grapefruit shandy

Simply mix together the homemade grapefruit soda ingredients in a glass, then add the beer. It all comes together with a light, refreshing citrus flavor: perfect for summer…or really anytime!

The type of beer to use

The best beer for a grapefruit shandy? Wheat beer is our preference. The flavor is complex but not hoppy, which works well with the sweet tart citrus of the grapefruit. Of course, you can use any American lager for this drink. We used 3 Floyds Gumballhead when we made this one, and it was perfect. Try to find a craft wheat beer that’s local to your area, if possible.

It’s complex but not hoppy, which goes hand in hand with the zing of lemon. You can use any American lager, but wheat beer is best. We used 3 Floyds Gumballhead for our summer shandy, and it was perfect.

Once you’ve tried this grapefruit shandy, there are a few more variations on this tasty drink! Here are a few options for you to make next:

Got grapefruit? This citrus is perfect in cocktails of all kinds! Pick from some of these favorite grapefruit cocktails:

When to serve a grapefruit shandy

A grapefruit shandy is perfect for summer, but it works anytime you need a little sunny boost! Drink it as a:

The grapefruit shandy is the most refreshing, citrusy beer cocktail! This drink is at its best homemade with a few simple ingredients.