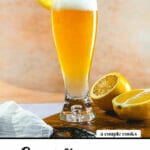 Here’s how to make the best summer shandy! This refreshing beer cocktail is easy to make at home with a few simple ingredients.

Ready for the most refreshing beer cocktail? Try the Summer Shandy! This British cocktail made with beer and lemon soda is one of the greatest European inventions. It’s the beer version of a spritzer, watered down wine made for cooling off on a hot day. You might know the summer shandy from the popular Leinenkugel brand of lemonade-flavored beer. But a homemade shandy is 100% more delicious and refreshing! Here’s what it is and how to make it.

A shandy is a European beer cocktail, invented in Britain in the mid-1800’s. It comes from the name shandygaff, which refers to beer mixed with ginger beer or ginger ale. Why water down your beer? Just like the wine spritzer, for two reasons: it’s ultra refreshing, and it’s a low alcohol drink, which makes it more hydrating in warm weather.

What’s in a summer shandy?

There’s lots of variation in a summer shandy for the mixer with the beer. As we mentioned above, lemon soda, lime lime soda (like Sprite), or sparkling lemonade work. But the very best mixer of all is homemade sparkling lemon: a mix of lemon juice, simple syrup and sparkling water. Try it once and we promise: you won’t go back! Here’s what you’ll need for this summer shandy recipe:

In this summer shandy recipe, we used the standard ratio: 50% beer and 50% sparkling lemonade. Of course, you can tinker with the ratios to customize what you like best!

The type of beer to use

The best beer for a summer shandy? Wheat beer is our favorite. It’s complex but not hoppy, which goes hand in hand with the zing of lemon. You can use any American lager, but wheat beer is best. We used 3 Floyds Gumballhead for our summer shandy, and it was perfect.

Variations on the shandy

There are lots of ways to make a shandy, with all sorts of mixers to go with the beer! This low alcohol drink is perfect for summer, and you can mix it with your favorite fruit juices or sodas. Here are a few more shandy recipes we love:

And that’s it: how to make a summer shandy! Let us know what you think of this homemade shandy in the comments below!

Love mixing up cocktails with beer? Beer cocktails and wine cocktails are some of our favorites to mix up. Here are a few more ideas to try:

When to serve a summer shandy

The summer shandy is perfect for a lazy afternoon on the patio or a meal on the porch! Drink it as a:

Here’s how to make the best summer shandy! This refreshing beer cocktail is easy to make at home with a few simple ingredients.