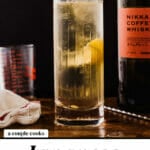 The Japanese Highball is a bubbly cocktail starring Japanese whiskey and sparkling water! It’s impressive and easy to drink.

Got Japanese whisky? Let’s make a highball! The Japanese Highball is a variation on the Whiskey Highball using Japanese whisky, ode to the country’s fascination with drinking these tall, bubbly drinks. Highballs are popular in Japan since they make conveniently low alcohol cocktails that are easy to sip. Combine liquor with bubbly sparkling water, and you’ve got a refreshing drink that helps you consume alcohol a little more slowly. This one’s a great way to enjoy your favorite Japanese whisky. Here’s how to make it!

The Japanese Highball is a highball cocktail, part of a family of drinks that pair liquor with a larger portion of a non-alcoholic mixer (like tonic water or club soda). It’s essentially a Whiskey Highball, made with Japanese whisky. The whiskey highball was born in the early 1900’s and initially combined Scotch whiskey with soda water, called “scotch and soda.” You can order any type of highball in Japan, but it’s popular with Japanese whisky. The ingredients for a Japanese Highball are:

What’s Japanese whisky, and how is it different from other types? We’ve got answers. Here’s what to know:

What to use for sparkling water: club soda vs seltzer

Once you’ve got your Japanese whisky, all you need is sparkling water, aka soda water. There are lots of different names for this type of carbonated mixed when you go to show. Here are some of the differences between club soda vs seltzer, and what you should and shouldn’t look for for this recipe:

How to make the best Japanese highball

How to make the best Japanese highball? Some recipes claim that an official Japanese highball has to be stirred 13.5 times clockwise. However, our research couldn’t find any proof this was the traditional way to do it. (Feel free to let us know if you have more clues in the comments below.) But we do have a few tips on how to make this a great drink:

There are so many great highball cocktails that mix liquor with a bubbly mixer! Here are some of our favorites:

When to serve a Japanese Highball

The Japanese Highball is bubbly and whiskey-forward, perfect for anytime. It’s perfect for sipping as a:

The Japanese Highball is a bubbly cocktail starring Japanese whiskey and sparkling water! It’s impressive and easy to drink.

*To convert to tablespoons, 1 tablespoon = 2 ounces