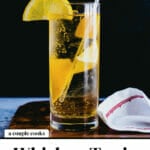 The Whiskey Tonic is one of the easiest, tastiest cocktails around! Mix bourbon or whiskey and tonic water for a simple, bubbly drink.

Want a light, bubbly cocktail starring whiskey or bourbon? Mix it with tonic water for a Whiskey Tonic! You might first think of a Gin and Tonic or Vodka Tonic when it comes to tonic water. But the sweet, bubbly carbonation pairs perfectly with oaky, spicy whiskey. In fact, we love toning down whiskey this way, especially in the summer. Here’s more about how to make a whiskey and tonic, and a few more great bubbly highball cocktails.

The Whiskey Tonic is a highball cocktail, part of a family of drinks that pair liquor with a larger portion of a non-alcoholic mixer (like tonic water or soda water). It’s similar to a Whiskey Highball, The whiskey highball was born in the early 1900’s and initially combined Scotch whiskey with soda water, called “scotch and soda.” The Whiskey Tonic is essentially a Whiskey Highball, but uses tonic water instead of soda water. The ingredients for a Whiskey tonic are:

The best whiskey for a Whiskey Tonic?

You can use any type of whiskey in a Whiskey Tonic! The fun part is that switching up the whiskey makes it a different drink, depending on what you mix it with. Here are some ideas:

Best tonic water to use

Tonic water is a carbonated water that also contains quinine and is lightly sweetened. Its flavor is bubbly, bitter, sweet and a little sour all at once. Classic cocktails use tonic water not only to dilute liquor with bubbles, but for its nuance in flavor.

What’s the best tonic water brand? These days there are a lot of options. Our favorite brand is Q Tonic: it has great flavor and is sold in small cans, just enough for a few drinks. We also like Q for ginger beer and ginger ale.

What is a good mixer for whiskey?

You can use the concept of a whiskey tonic with other mixers, too! It doesn’t have to be tonic water, though the sweetness is a nice match. Personally, we enjoy the subtle sweetness tonic water brings as a mixer versus soda water. But here are some of the best mixers for whiskey:

Mixing a liquor with soda water, tonic water or even ginger ale is an age old practice! It makes them lighter and easier to drink. Here are a few more highball cocktails in this family:

When to serve a Whiskey Tonic

The whiskey tonic is easy to make and ultra refreshing. It’s great for serving as a:

The Whiskey Tonic is one of the easiest, tastiest cocktails around! Mix bourbon or whiskey and tonic water for a simple, bubbly drink.