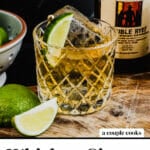 The Whiskey Ginger is an easy cocktail that’s so refreshing! Whiskey and ginger ale is a classic combination: use any type you have on hand.

Here’s a classic combination that makes one of the easiest cocktails…ever. The Whiskey Ginger! Whiskey and ginger ale are the perfect pair: the spicy notes of the liquor meld into the subtle sweet and bubbly notes of the ale. Add a squeeze of lime and a big ice cube, and you’re in business! We’re big fans of ginger ale cocktails and ginger beer cocktails around here. You can make this one with either, but it’s typically made with ale. Here’s what you need to know about how to mix it up!

The Whiskey Ginger is another name for mixing whiskey and ginger ale. It’s essentially the same as a Whiskey Highball, a classic cocktail born in the early 1990’s. A highball cocktail is a family of drinks that combine alcohol with a larger percentage of non-alcoholic mixer, like the gin and tonic or vodka soda. The whiskey highball initially combined Scotch with soda water, called “scotch and soda.” It’s often served with soda water, but ginger ale is a common substitute. The ingredients you’ll need for a Whiskey Ginger are:

Why pair whiskey and ginger ale?

Whiskey and ginger ale are a classic pairing, because they compliment each other beautifully! The whiskey brings in spicy and oaky notes, and ale is perfect to offset it: it’s subtly sweet and bubbly. The two together make a stellar combo, similar to the combination in a Whiskey and Coke.

Can you use ginger beer in a Whiskey Ginger?

Can you pair whiskey and ginger beer? Absolutely, though it has a much different flavor profile! Using ginger beer makes it essentially a Kentucky Mule or Irish Mule, which add lime juice. Head over for those recipes!

The best whiskey for a Whiskey Ginger

You can use any type of whiskey in your Whiskey Ginger: you’ll get a different drink with each variety! Here are the major types of whiskey and how the flavors change the drink, listed in order of our preference:

There are several types of ginger ale brands on the market. Here’s what we like:

There are lots of ways to mix ginger ale into tasty drinks! Here are some of favorites to try:

When to serve a Whiskey Ginger

This cocktail is bubbly and light: a great party drink! Try it as a:

The Whiskey Ginger is an easy cocktail that’s so refreshing! Whiskey and ginger ale is a classic combination: use any type you have on hand.

There are so many famous drinks starring this liquor! Here are some of the top whiskey cocktails to try: