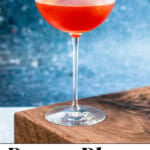 The Paper Plane cocktail is a modern classic that’s a must try! It’s bittersweet and tangy, hitting a magical balance between bourbon and amaro.

If you’re an avid homemade cocktail drinker, then here’s a must-make drink: the Paper Plane! This one is a brilliant study in balance and contrast. It’s bitter, sweet and tangy all at once, hitting a magical synergy between the bourbon and amaro. It’s truly remarkable, and you might think it was a classic cocktail. But look a little closer: did 1920’s bartenders mix Kentucky bourbon with Italian bitters? No, this one’s a true modern classic…and one of the best cocktails we’ve had (out of hundreds).

The Paper Plane cocktail is a drink featuring bourbon, Aperol and amaro created in 2007 by bartender Sam Ross. He later started making it at the famous Milk & Honey bar in New York City (where the Gold Rush also was invented). The cocktail is a spin on the classic Last Word cocktail and features an easy equal-parts formula. The cocktail is named after the M.I.A song Paper Planes, which Sam Ross says he listened to while creating the drink.

The ingredients in a Paper Plane cocktail are equal parts:

Let’s break down the two Italian ingredients: Aperol and amaro.

Aperol is an Italian bitter with a bright orange color and lightly sweet, citrusy flavor. It’s an aperitif, a liqueur to stimulate your appetite before a meal. Another aperitif you might know is Campari (the main ingredient in a Negroni): it was the first ever aperitif invented in Italy in the 1860’s. Aperol came along in 1919, and it was later bought by the Campari company in the 1990’s.

Aperol is most commonly used in the popular Aperol spritz cocktail, and it features in this tangy Aperol cocktail and the fantastic Naked and Famous (inspired by the Paper Plane!). The flavor is lightly sweet, bitter, and balanced, with notes of herbs and citrus. Its light flavor is much more approachable than bitter Campari, which can be polarizing.

Amaro is a little confusing because it’s a family of liqueurs that encompass Aperol and Campari, but then there’s lots of others too. Here’s the scoop on amaro:

How to make a Paper Plane: shake and strain!

The Paper Plane is a standard shaken cocktail: there’s really nothing more to the drink than shaking and straining! Here’s what to do, with a few substitute suggestions for equipment:

When to serve a Paper Plane cocktail

The Paper Plane cocktail is a fancy cocktail that’s modern and fresh. Use it to impress cocktail lovers! It requires a few special ingredients, but they’re absolutely worth the purchase. Serve it as a:

The Paper Plane cocktail is a modern classic that’s a must try! It’s bittersweet and tangy, hitting a magical balance between bourbon and amaro.

Here are a few more of the top bourbon cocktails to have in your arsenal: