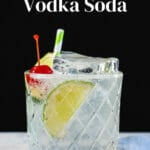 Here’s a cocktail that’s light, refreshing, and goes down easy: the Vodka Soda! Cousin to the Vodka Tonic, the vodka soda is even more tart and refreshing. Just lime, vodka and soda water make the best hydrating combination! Bonus: it’s a low calorie cocktail, too. This concept is actually called a “rickey”, a classic cocktail made with liquor and soda water. Here’s how to make it and a bit more about the drink!

The vodka soda is a highball cocktail made with vodka, lime juice, and soda water. The concept of watering down spirits has a long history. The drink is related to the Gin Rickey, a cocktail invented in the 1880’s! It was first created with bourbon, then became very popular with gin a few years later, pairing the spirit with lime juice and soda water. Other cocktails that use this concept are the Whiskey Highball, Ranch Water, the Mojito, and the Aperol Spritz.

How to make a vodka soda? It’s very simple, like most highball cocktails! Grab these ingredients and pour them into a glass:

Some people choose this drink because it’s considered a “healthy cocktail” and has less calories than the standard cocktail. How many calories in a vodka soda? This drink has 135 calories, 131 of which come from the 2 ounces of vodka in this drink. How does this stack up compared to other cocktails? Here’s a comparison of some popular drinks with the calories in vodka soda:

In general, most cocktails have between 150 and 200 calories. So while the vodka soda has slightly lower calories than other drinks, it’s not significantly so. If you’re worried about calories: opt for water instead!

Step it up: add garnishes to your vodka soda

The vodka soda is a laid back cocktail that takes literally 2 minutes to make. But want to make it look a little fancier for entertaining? Here’s what to do:

The concept of watering down alcohol goes back hundreds of years. For example, a Wine Spritzer is wine diluted with water, which started back in the 19th century as a way to make bubbly wine. Here are a few famous cocktails that use soda water or tonic water to water down the alcohol:

When to serve a vodka soda

The vodka soda is bubbly and refreshing. It works well for summer, but you can drink it anytime (and we do!). It’s great for serving as a:

A bottle of vodka makes so many great drinks! Here are some favorites to try: