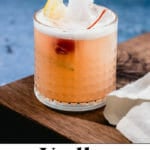 Do you love tart and sour drinks? Then get ready for this Vodka Sour! This drink is refreshingly sweet tart, with an egg white foam that makes for a creamy, frothy topping. The foam gives it a vintage vibe, making it showy for entertaining. But it’s so easy to make, it perfect for a laid back afternoon on the porch or cocktail night in. Alex and I love sour cocktails like the Whiskey Sour, so we set about to try them all. This Vodka Sour is a stand-out vodka cocktail that’s a must make!

What’s in a vodka sour?

A vodka sour is one in the family of sour cocktails. Sours are defined as three parts: liquor, citrus, and sweetener. The most basic formula for a sour cocktail is 2 ounces spirit, ¾ ounce sour, ¾ ounce sweet. Of course, there are all sorts of variations on the theme! The most classic of all sours are the Whiskey Sour and Pisco Sour. But there are many more: with or without the title “sour”. This vodka sour is very similar to our Tequila Sour and Gin Sour! The ingredients for this vodka sour are:

A vodka sour is similar to another drink with a fancy name: the Cosmopolitan Cocktail! The Cosmo is essentially a vodka sour that uses cranberry juice to give it a vibrant pink color. Of course it skips the egg white foam and bitters, and uses orange liqueur (in this case Cointreau).

Another variation on the vodka sour is a Vodka Gimlet! The main difference with the gimlet is it uses lime juice instead of lemon. It also skips the egg white foam and bitters. Both are great cocktails that we’d absolutely recommend trying!

How to make a vodka sour (basic steps)

The vodka sour is quick and easy to make: the only time involved is juicing the citrus and separating out the egg white! Here are the basic steps (or jump to the recipe):

The technique above is a fancy way to get that beautiful frothy white foam on top. Keep reading for how…

Dry shake to get the perfect egg white foam

Bartenders have added egg whites to cocktails for about a century. Why? The foam adds a fun frothy texture on top and adds a rich, creamy flavor (it can also tone down the tang of the citrus). The best frothy egg white form is achieved by doing a Dry Shake. We use this technique in drinks like the Gin Fizz, White Lady, Clover Club, Boston Sour, Gin Sour, and Tequila Sour. Here’s how it works:

Are you into vegan cooking and want to make an egg white foam? Don’t worry: you can use aquafaba! Aquafaba is the liquid that’s in a can of chickpeas. Because it’s starchy, it can work as a binder similar to an egg.

Bitters are optional in a vodka sour, but add flavor (and color)

Of course, the vodka sour works without bitters. But for the very best vodka sour, we recommend adding a few drops of bitters! Angostura bitters are popularly used in cocktails to add a complex and bitter undertone. They take a drink from one-note to extraordinarily complex with just a few drops!

In this drink, we added the bitters to the cocktail itself (not to the egg white foam, as is sometimes done by bartenders). This adds lots of flavor: and it also adds a good amount of color! The bitters make this vodka sour a beautiful peach color. If you skip the bitters, the drink is clear.

When to serve a vodka sour

The vodka sour is a classy-looking sour that’s perfect for many occasions! It’s great for sipping as a:

Sour cocktails are a family of cocktails that blend liquor, sour and sweet in the perfect proportions! Here are some of our favorite sours: