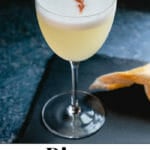 The pisco sour is one of the great classic cocktails! The magic meld of pisco and lime in this Peruvian drink gives it a flavor that’s like none other.

There’s truly no drink like it. Meet the classic pisco sour! This sour cocktail from Peru is mega popular for a reason. It’s just that good. Here at A Couple Cooks, we’ve made all the sours: our famous Whiskey Sour and Amaretto Sour, the two-toned New York Sour, and many more. But there’s really nothing like a pisco sour. The way the pisco melds with the lime makes it bright, mellow, and distinctly magical. Here’s how to make this famous classic cocktail that’s earned it’s place in history.

The pisco sour is a sour cocktail made with pisco liquor, a clear brandy made in Peru and Chile. Sours are defined as three parts: liquor, citrus, and sweetener. Often in the 1920’s, sours were with an egg white foam, which adds a frothy texture and creamy body to the drink. The exact date the pisco sour was invented isn’t clear: some claim the first recipe was printed in a cocktail book in 1903 (source).

But the most widely accepted theory is that the pisco sour was invented by American bartender Victor Morris in the 1920’s, while he was living in Peru. It was inspired by the Whiskey Sour (invented in the 1880’s), but swaps in pisco for whiskey and lime for lemon. This drink is on the list of International Bartender Association’s IBA official cocktails, meaning it has an “official” definition. The ingredients in a pisco sour are:

It’s worth buying a bottle of pisco…period.

Confession from your resident homemade cocktail experts. We procrastinated making the pisco sour for a long time. Why? It requires a special purchase: a bottle of pisco liquor. It’s not used in many of the other cocktails we make on the regular (like these). So we weren’t sure if it was worth it to spring for a bottle.

After trying this drink, here’s the verdict: for the adventurous home mixologist, pisco is absolutely worth it! If you love mixing cocktails at home, pisco has a unique flavor that can’t be replaced by anything else. The pisco sour is showy and perfect for entertaining: it tastes just like you ordered it at a fancy bar.

Where to find it? Pisco is a clear brandy made in Peru and Chile. Because of the popularity of this drink, it’s easy to find at your local liquor store.

How to make a pisco sour (basic steps)

The pisco sour is quick and easy to make: the only time involved is juicing the citrus and separating out the egg white! Here are the basic steps (or jump to the recipe):

This technique is actually called a dry shake: it’s what makes that signature foamy top. Here’s how it works…

Bartenders have added egg whites to cocktails since the 1860’s to add a frothy texture to the top and a creamy rich flavor to each sip. How to get the perfect foam? The best frothy egg white form is achieved by doing a Dry Shake. You’ll use in lots of classic cocktail recipes like the Gin Fizz. Here’s how it works:

How to make bitters designs on a pisco sour

Once you’ve got that egg white foam, the last step is to shake some cocktail bitters on top! Bitters are small bottles of liquor infused with herbs and fruits that taste…well, bitter! They’re intended to be added into cocktails in 1 or 2 dashes to add complexity to the flavor. In the Pisco sour we used Angostura bitters, which are a popular and easy to find bottle.

It’s common with the Pisco sour that you’ll see bartenders make fancy designs using the bitters on the top of the foam. Here’s how to make the pattern you see here:

Cousin drinks: all the sours!

There is an entire cocktail family called sour cocktails. Within that are those that actually have the word “Sour” in the title. The Whiskey Sour, Amaretto Sour, Boston Sour, Vodka Sour, Tequila Sour and Gin Sour all have similar elements with the pisco sour, except for the types of liquor:

When to serve a pisco sour

The pisco sour is a perfectly balanced upscale cocktail great for showing off to guests! Serve it as a:

The Pisco sour is one of the great classic cocktails! The magic meld of pisco and lime in this Peruvian drink gives it a flavor that’s like none other.