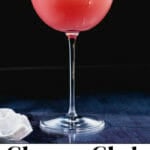 Here’s a sophisticated classic cocktail that steals the show: the Clover Club! This bright pink drink stems back before Prohibition, but it’s just as en vogue today. Sweet raspberry or grenadine syrup combine with zingy lemon and gin to make a perfectly balanced sweet tart drink. The best part: a classic egg white foam gives a creamy body and frothy texture to each sip! This one’s a unique gin cocktail that’s just plain fun. We often make gin cocktails like the Gin Fizz: the one’s a colorful variation on the theme.

The Clover Club cocktail is a tangy gin sour cocktail that was first recorded in print in 1908. It was named after a gentleman’s club in Philadelphia called the Clover Club, which included prominent lawyers, writers, and politicians. Later the drink fell out of fashion, but it’s come back in style today with the revival of classic cocktails! Interestingly, the drink was originally made with grenadine but today is made with raspberry syrup (more on that below).

This drink is a classic cocktail on the list of International Bartender Association’s IBA official cocktails, meaning it has an official definition. The ingredients in a Clover Club cocktail are:

The Clover Club was originally made with grenadine

Many cocktail connoisseurs will tell you that it’s not a Clover Club unless it’s made with raspberry syrup. But get this: in our research we found a recipe for the Clover Club was printed in the Pittsburgh Press in 1909*. The ingredient list included an egg white, lemon, lime, gin, sugar, and “a pony of grenadine.” Yes, that’s right: grenadine was included in the original version of the Clover Club cocktail!

Grenadine is easy to find, which is why we like using it here. You also don’t need to find fresh raspberries to make syrup, or look for specialty raspberry syrup at the store. A few things about grenadine:

*Per The Last Night on the Titanic by Veronica Hinke

Or make it with raspberry syrup!

By 1917, recipes for the Clover Club started to include raspberry syrup. So both are equally valid, though today you’ll most often see it made with raspberry syrup. You can buy it at a liquor store or online, but it’s more fun to make it at home! Here are the basic steps to homemade raspberry syrup:

What else to use it in? Try raspberry cocktails like the Raspberry Martini, Raspberry Lime Rickey, and Floradora.

How to make a Clover Club cocktail (basic steps)

Once you’ve decided on grenadine vs raspberry syrup, making a Clover Club cocktail is a breeze! Here are the basic steps (or jump to the recipe):

Bartenders have added egg whites to cocktails since the 1860’s. Why? They add a frothy texture to each sip, and a creamy rich flavor. The best frothy egg white form is achieved by doing a Dry Shake. You’ll use in lots of classic cocktail recipes like the Gin Fizz, Amaretto Sour, and Boston Sour. Here’s how it works:

When to serve a Clover Club cocktail

The Clover Club cocktail is a stunning signature pink drink! It’s great for special occasions since it uses a specialty ingredient, or use grenadine to make it anytime. Drink it as a:

The Clover Club is a sour cocktail: one in the family of drinks that combine liquor, citrus, and sweetener. Here are a few more related sour cocktails: