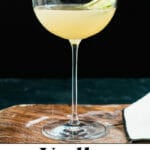 A vodka gimlet is a variation on the classic gin gimlet with a smoother flavor! It’s got just three ingredients: vodka, lime and syrup.

Looking for a spin on the classic gimlet? Try this vodka gimlet! This sophisticated retro cocktail has a tart, refreshing flavor and a chic vibe. Why make a gimlet with vodka when it’s traditionally made with gin? It’s got a smoother flavor. While we love the botantical notes that gin brings, the vodka gimlet is a fun variation. Here’s how to make it!

A vodka gimlet is a spin on the classic gimlet, which typically uses gin. The gimlet is a classic cocktail made of 2 parts gin and 1 part lime juice. Sometimes it’s served with a splash of soda water. For the vodka version, you simply swap out the gin. Here’s what’s in a vodka gimlet:

Origin of the gimlet

The gimlet became popular in the 1950’s, so it’s a retro classic cocktail! It’s first appearance was actually in a cocktail book from 1928, so it goes back at least that far. If you’re like me, you might be intrigued by where the name came from (so many fun cocktail names! Tom Collins, Greyhound, Salty Dog, Hanky Panky…). The two theories are: a surgeon named Sir Thomas Gimlette started serving it to sailors to prevent scurvy, or a tool called the gimlet used to drill holes in navy ships (named after the drink’s “piercing effect”).

How to make a vodka gimlet

What does a vodka gimlet taste like? It’s tangy and balanced, with a smoother flavor than a gin gimlet (which is more botanical and gin forward). Here are the basic steps for how to make a vodka gimlet (see the full recipe quantities below):

What type of glass to use?

A gimlet is traditionally served in a cocktail glass, which is a stemmed glass with a small rounded top. You can also serve it in a martini glass, which is similar but has more of a cone shape. If you want it to look perfectly classic, use either of these or whatever stemmed glass you have on hand. Of course, you can serve it in any type of glass you choose: even a lowball glass works!

Other types of gimlets

There are a few different ways to make a gimlet! Here are our favorite ways:

Use simple syrup or maple syrup

Want to make a naturally sweet cocktail? The sweetener we like to use best for our cocktails is actually not the traditional simple syrup: it’s maple syrup! Why? Maple syrup sweetens the drink more gently, and it adds a subtle nuance in flavor. Every time Alex and I taste test the two, we prefer the maple. Simple syrup has a more straight-forward, clear flavor: you can use it here to be even more classic.

Because the vodka gimlet is so simple with only 3 ingredients, it’s important to use best quality vodka here! The rule of thumb we like to use is simply buy a mid-priced vodka when selecting your vodka. Price is typically an approximate indicator of quality with most spirits. Here we used Tito’s vodka. Bonus points if you can find locally distilled vodka!

Add a good vodka to your liquor cabinet and you can make these favorite vodka cocktails:

When to serve a vodka gimlet

The vodka gimlet is a chic and sophisticated cocktail, great for serving as a:

A vodka gimlet is a variation on the classic gin gimlet with a smoother flavor! It’s got just three ingredients: vodka, lime and syrup.