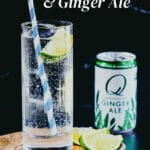 Here’s a winning cocktail combination: vodka and ginger ale! Try this perfect ratio for an easy and refreshing drink.

When it comes to cocktails, there’s no need to get fancy with shakers or fancy syrups. In fact, some of the best drinks are just two ingredients. Such is the case with Vodka and Ginger Ale! Mix vodka with a little bubbly ginger ale and it’s pretty fantastic: no need for buying fancy liqueurs required. Here’s how to make this tasty and refreshing highball drink!

What’s a Vodka and Ginger Ale?

The Vodka and Ginger Ale is cocktail whose closest relative is the Vodka Tonic or Vodka Soda. Though it’s similar, it’s not really a relative of the Moscow Mule, which pairs vodka with ginger beer and lime. Vodka and ginger ale has a sweet, bubbly flavor with a subtle ginger finish. Here’s what to know about this drink:

The vodka to use in this drink

A highball cocktail is a drink where the non-alcoholic mixer makes up a larger percentage of the drink than the alcohol. Drinks like these make it easy to cover up sub-par alcohol: this was in fact the reason that many highball cocktails were invented. All that to say: the quality of the vodka in a Vodka and Ginger Ale isn’t highly important! Don’t waste the good stuff by covering it up with ginger ale. But the ginger ale…that quality does matter.

There are several types of ginger ale brands on the market. The quality does matter here, because many brands can be too sweet and make the drink taste flat. Grab one of these brands for your Vodka and Ginger Ale:

What’s the difference of ginger beer vs ginger ale?

Yes, you can serve vodka and ginger beer too! But that makes it closer to a Moscow Mule than a highball drink. Wondering the difference of ginger beer vs ginger ale? Here’s a break down:

Mixing carbonated mixers with alcohol is an ages old tradition! There are lots of spins on this concept. Once you’ve tried the Vodka and Ginger Ale, there are so many more to explore! Here are some favorite variations:

When to serve a Vodka and Ginger Ale

Vodka and ginger ale is easy and laid back, perfect for patio sipping or impromptu parties. Try it as a:

Here’s a winning cocktail combination: vodka and ginger ale! Try this perfect ratio for an easy and refreshing drink.