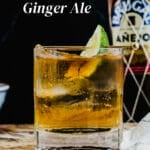 Rum and ginger ale is the perfect combination! This refreshing spin on the Dark and Stormy has a subtler ginger flavor.

Looking for a tasty, refreshing cocktail that takes 1 minute to mix together? Try Rum and Ginger Ale! It’s similar to a Dark and Stormy, but the ginger flavor is subtler and melts right into the rum. Add a squeeze of lime and it’s the perfect refreshing highball. It’s a great way to make a fast and easy cocktail with a bottle of rum. We like it best with aged rum, but whatever you have will do! Grab your bottle and let’s get mixing.

What’s a Rum and Ginger Ale?

The Rum and Ginger Ale is a cocktail whose closest relative is actually the Rum and Coke. Also known as the Cuba Libre, the rum and coke was invented in Cuba in the early 1900’s. “Cuba Libre” means “Free Cuba” in Spanish: it’s a rallying cry that came from the Spanish American war in 1898. So the tradition of mixing rum with fizzy mixers like cola has been around for at least 100 years! Here’s what to know about the rum and ginger ale:

The best rum for Rum and Ginger Ale

You can use any type of rum when you make Rum and Ginger Ale. In fact, you’ll get a different drink with each variety! Here are the major types of rum and how the flavors change the drink, listed in order of our preference:

What’s the difference vs ginger beer? Go to Ginger Beer vs Ginger Ale.

Mixing carbonated mixers with alcohol is an ages old tradition! There are lots of spins on this concept. Once you’ve tried the Rum and Ginger Ale, there are so many more to explore! Here are some favorite variations:

When to serve a Rum and Ginger Ale

This cocktail is bubbly and light: great for impromptu gatherings and parties, or simply sipping on the patio. Try it as a:

Rum and ginger ale is the perfect combination! This refreshing spin on the Dark and Stormy has a subtler ginger flavor.