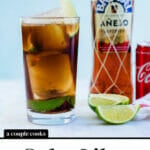 Here’s how to make the Cuba Libre drink, a 3 ingredient recipe! This cocktail is easy to make and similar to the Rum and Coke…but better.

Here’s a Cuban cocktail that’s made all over the world…because it’s just that simple. Meet the Cuba Libre! This drink recipe has just 3 ingredients: lime, cola and rum. Perhaps it looks and sounds similar to a drink you know? Yes, this famous Cuban drink is nearly a Rum and Coke…but there are a few subtle differences that make it a distinct drink. This classic cocktail has over 100 years of history and a refreshing, nuanced flavor. Here’s a bit about its origins, and how to make the best Cuba Libre drink around.

The Cuba Libre is a 3-ingredient cocktail made with lime, cola and rum that originated in Cuba in the early 1900’s. Like many cocktail recipes, the exact origin story is murky. “Cuba Libre” means “Free Cuba” in Spanish. It’s a rallying cry that came from the Spanish American war in 1898, calling for Cuban independence from Spain. The drink came after the war, since Coca Cola didn’t come to Cuba until 1900.

The exact person who invented the Cuba Libre drink is unknown, but it became very popular in Cuba in the early 1900s and quickly spread to the US. The American version became dubbed “rum and coke.” But the Cuban version is a unique because it also uses lime juice, giving it a brighter, more tangy flavor than the 2-ingredient rum and coke.

How to make the best Cuba Libre drink: 2 tips!

The Cuba Libre is much better than a rum and coke, in our opinion. The lime juice helps to balance the sweetness of the cola. There are a few things that take this recipe to the next level and make the very best Cuba Libre drink:

Types of rum to use: in order of preference

You can use any type of rum in a Cuba Libre! While we like it best with a golden or aged rum, it can work with any variety. Here are the types of rum to use in a Cuba Libre drink, in order of preference:

The Cuba Libre is one of a few iconic Cuban classic cocktails. In fact, this country has originated some of the most well-known cocktails of all time! You’ll find some of the greatest names in drink history bubbling up from this Caribbean island. Once you’ve made this Cuba Libre recipe, make sure to try:

Variations on the Cuba Libre

The Cuba Libre spawned a myriad of cocktails that mix liquor and coke! Here are a few ideas to try — each have their own unique character! Use the same Cuba Libre ratio unless otherwise noted:

When to serve this Cuba Libre recipe

The Cuba Libre is bold, refreshing, cheap, and beyond easy to make. It’s perfect for sipping as a:

Here’s how to make the Cuba Libre drink, a 3 ingredient Cuban cocktail recipe! It’s beyond easy to make and similar to the Rum and Coke…but better.