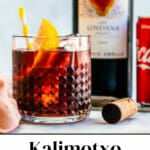 Here’s how to make a perfect kalimotxo (aka calimocho), a Spanish cocktail with red wine and coke! It’s a quick way to beat a sangria craving.

Here’s a simple cocktail that’s greater than the sum of its parts: the Kalimotxo! Also known as the Calimocho, this Spanish drink has a sophisticated flavor but it’s only two ingredients: red wine and coke! The dry wine balances the sweet cola perfectly, making this Basque country cocktail taste almost like sangria or a Spanish vermouth. It’s sweetly earthy with caramel notes, the ideal laid back drink for sipping on over ice with friends or as a night cap. Here’s what you need to know about the Kalimotxo!

What’s a Kalimotxo, aka Calimocho?

The Kalimotxo is a drink that originated in Spain that’s equal parts red wine and cola. It originated in the 1970’s, apparently an invention of servers at a festival who were trying to cover up bad red wine. A genius combination, we say! It’s now spread all over the world, especially popular in Eastern Europe as well as the Basque Country in Spain where it originated.

The Kalimotxo is also known as the Calimocho, which is how its pronounced (Call-ee-mo-cho). Or you can just call it “red wine and coke.” Whatever the case, this special drink needs to catch on here in America, fast. The ingredients in a Kalimotxo are equal parts:

Best red wine for a Kalimotxo

What’s the best red wine for a Kalimotxo? Well, the Calimocho is the type of drink that’s meant to be made with low brow wine. So really, anything goes! The cola will cover up red wine of dubious quality. But if you want to step it up a little, make it with a Spanish or Argentinian red! Here are a few varietals of dry red wine that make a sophisticated, Spanish style “red wine and coke”:

Step up red wine and coke: with a lemon squeeze

This drink is so simple, there’s not much to do to make it better. But if you want a little flair to your Kalimotxo, add a squeeze of lemon before you drink it! The acidity of the lemon cuts the sweetness of the cola so it tastes more balanced. Another option is an orange wedge, which gives it even more of a sangria vibe.

This drink bears a strong resemblance to once you’ve probably had before…the Rum and Coke! It was born in Cuba under the name Cuba Libre, pairing rum, coke and a squeeze of lime. The only difference is the ratio: the rum and coke is 2:1 whereas the Kalimotxo is equal parts. But they’re very similar: in fact, the Calimocho was originally called the “rioja libre” (rioja meaning red wine, and “libre” taken from Cuba Libre, meaning “free Cuba”).

There are lots more variations on the red wine and coke (all using the 2:1 ratio). Here are a few more ideas of liquors to swap in:

When to serve a Kalimotxo

The Kalimotxo / Calimocho is an easy cocktail you can make anytime! It’s perfect for serving as a:

Here’s how to make a perfect kalimotxo (aka calimocho), a Spanish cocktail with red wine and coke! It’s a quick way to beat a sangria craving.

There are so many cocktails to make with wine! Here are some of favorites to try: