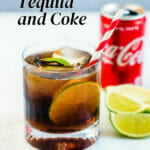 Tequila and Coke is one of the easiest tequila cocktails there is (aka the Batanga)! Here’s how to take this drink to the next level.

Looking for a straight simple tequila drink? Try a Tequila and Coke: aka the Batanga! There’s something decidedly intriguing about the earthy, fruity flavor of tequila combined with the caramel flavor of cola. It gives vibes of drinking a margarita and a rum and coke at the same time! You can mix any alcohol with coke (and we have), but the tequila and coke is something special. Here’s the ratio to use, and a few tips for making the best version of this easy cocktail.

Best tequila for Tequila and Coke, aka the Batanga

We uncovered the Tequila and Coke in our tour of all the variations on a rum and coke. (We’ll get to those later.) But turns out, it’s a popular drink in Mexico, where it’s called the Batanga! Like a Rum and Coke, it’s very loose and not considered a high-brow cocktail. (It reminds us of the Tex Mex special, Ranch Water.) But it’s a legit cocktail in its own right, especially when you use good tequila.

The tequila and coke ratio

Tip 1 to making the best Tequila and Coke: use the right ratio! Here’s what to pour into your glass: keeping in mind you can slightly increase it if you’re using a highball glass. The tequila and coke ratio is:

Add lime to step it up

As you may already know: tequila and lime are soulmates. But even more importantly: citrus is key in a cola cocktail. The sweetness of the cola absolutely begs for the acidity of lime. You can add lime in 2 ways in this drink:

In Mexico, sometimes the Batanga features a salt rim on the glass. Not sure about you, but we never turn down a salt rim! The salt enhances the sweet and tart flavors in the drink, much like in the popular margarita. Of course, making a salt rim is an extra step, so you can skip it if you’re in a rush. Here’s how to make a perfect salt rim:

History of the tequila and coke

Mixing liquor with cola has a long history of over 100 years! The tequila and coke is a spin-off on the Rum and Coke, also known as the Cuba Libre. This 3-ingredient cocktail made with lime, cola and rum originated in Cuba in the early 1900’s. It quickly spread to America and around the world, and people started mixing all sorts of alcohol with cola. So people have been drinking tequila and coke informally for years.

When it comes to the Batanga, most sources credit Don Javier Delgado as the inventor of this cocktail in 1961! He was the owner of La Capilla in Tequila, Mexico. Read more about the Batanga here.

As we’ve mentioned, you can make a “blank and coke” with almost any spirit! In most cases, you can use the same ratio. These are great ideas for tasty but cheap drinks! Here are a few ideas to get you started — try using:

Tequila and Coke is one of the easiest tequila cocktails there is (aka the Batanga)! Here’s the ratio and how to take this drink to the next level.

Love tequila? Use too. Here are a few more tequila drinks we know you’ll love: