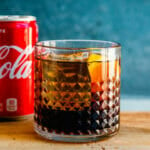 Here’s how to make Crown and Coke: one of the easiest Crown Royal cocktails there is! Here’s the ratio to use and a few tricks to step it up.

Got a bottle of Crown Royal whisky? Here’s the easiest way to make it into a cocktail: make Crown and Coke! This variation on the popular rum and coke might sound simple, but it tastes even better than the sum of its parts. The sweet caramel of cola is a fitting match for Crown Royal with its vanilla, brown sugar and oaky notes. It might be considered low brow by some, but with the right ratio and a few tips, it’s a legit Crown Royal cocktail!

Another popular cocktail with Crown? Try the Royal Flush.

The Crown and coke ratio

Of course, if you prefer a stronger drink, you can up the ratio by another ½ ounce or even 1 ounce of Crown Royal. But this is the standard and you can customize your drink from there.

Use lemon to add brightness to this Crown Royal cocktail

Most rum and coke or Crown and coke recipes don’t require lemon juice. But we’ve found it’s absolutely necessary for the flavor. The sweetness of the cola can be overwhelming, so a squeeze of lemon cuts the sweet with acidity.

Use the juice from 1 lemon wedge (1 teaspoon), or go up to ½ ounce of fresh lemon juice (1 tablespoon). You can taste the difference!

You can make endless varieties of Crown Royal cocktails by varying the type of Crown! This Canadian whisky was introduced in 1939: it was a tribute to the royal tour of Canada of King George VI and Queen Elizabeth (a fact The Crown fans will certainly appreciate!). It was available only in Canada until 1964, then introduced in the US in the 1960’s. Here are a few recommended types of Crown Royal to use in this drink:

One note: we recommend avoiding Crown Royal Maple. It had such a strong maple flavor that it overpowered the drink!

There are many ways to vary this very simple drink concept! The Rum and Coke was introduced in the 1920s, and it’s become one of the most popular drinks around the world. You can mix cola with just about any type of alcohol. Here are some ideas:

Here’s how to make Crown and Coke: one of the easiest Crown Royal cocktails there is! Here’s the ratio to use and a few tricks to step it up.