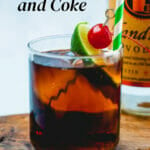 Vodka and Coke is the ultimate easy vodka cocktail! Here’s the ratio for how to make it and a few ideas on how to step it up.

Here’s one of the easiest vodka cocktails on the planet: Vodka and Coke! This variation on the classic rum and coke might sound a little low-brow, but this tried and true combination is a legit cocktail to add to your collection. Because vodka is pretty flavorless, it can be easily overpowered by cola. But add a few quick tips to the best vodka and coke, and it turns into an intriguing cocktail. Of course, you can use the ratio below to serve it straight up too: no judgement here!

The vodka and coke ratio

Tip 1 to making the best vodka and coke: use the right ratio! But keep this in mind: vodka has a subtle flavor, so it’s almost imperceptible in a vodka and coke. You’ll taste much more of an alcohol finish in a rum and coke or whiskey and coke. Here’s the vodka and coke ratio:

Muddle lime or lemon to step it up

Lime juice is absolutely essential in a vodka and coke, because otherwise the vodka fades into the background. What we recommend? Muddle 2 lime wedges in the glass first. This is similar to the technique used in the Cuba Libre. The flavor profile begs for a brightness from citrus to cut the sweetness of the cola! You can also use lemon for a similar effect, if that’s all you have.

For the very best vodka and coke, we’ve got one more tip. Add a few shakes of cocktail bitters! Cocktail bitters are liqueurs that are used to add intriguing flavors to cocktails, like a good Old Fashioned or Manhattan. They’re made with lots of herbs and spices, which adds complexity because the flavors are not easily recognizable.

Use any type of bitters you have on hand. The most common type of bitters is Angostura bitters: they’re easy to find online or at a liquor store. They get the name from their manufacturer: the House of Angostura in Trinidad and Tobago. Other popular bitters are orange bitters or Peychaud’s bitters.

Where did the vodka and coke come from?

The Vodka and Coke is a variation on the Rum and Coke, which itself is essentially a Cuba Libre. This 3-ingredient cocktail with lime, cola and rum originated in Cuba in the early 1900’s after Coca Cola was introduced. It went on to become very popular in Cuba, America and around the world.

There are many variations on this concept with lots of different alcohol types (below). A Vodka and Coke considered pretty low-brow in the cocktail world, but it’s very popular and a great way to cover bad alcohol. Or in this case, it makes the alcohol almost imperceptible! But try the tips we mentioned, and it becomes a drink in its own right.

You can make a “blank and coke” with almost any spirit. In most cases, you can use the same ratio as the Vodka and Coke. Honestly, we think a rum, whiskey, or even gin stand up to the cola better. The red wine variation below is a favorite! These are great ideas for tasty but cheap drinks. Here are a few ideas to get you started — try using:

If you’re making a cocktail with vodka…there are lots more drinks that might even be more interesting than a Vodka and Coke! Consider the following ideas:

Vodka and Coke is the ultimate easy vodka cocktail! Here’s the ratio for how to make it and a few ideas on how to step it up.