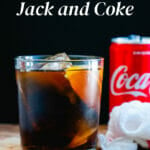 This Jack and Coke recipe makes the ideal version of this drink! Use this ratio and tips for the best easy cocktail with Jack Daniels.

Here’s the best easy way to make Jack Daniels into a cocktail: the Jack and Coke, aka Whiskey and Coke! This quick and dirty cocktail is considered by some to be low brow. But what’s the harm in a drink that’s fast, easy and tastes great? This cocktail is a descendent of the historic Rum and Coke, and guess what? There are a few tricks to mastering the very best version of a Jack and Coke recipe there is. This Tennessee whiskey it the perfect balance for sweet, bubbly cola. Here’s the correct drink ratio and a few easy things you can do to step up this drink!

How to make the best Jack and Coke

There are a few tips to making just the right version of Jack and Coke. This drink is a highball cocktail, meaning that it has a higher percentage of mixer (juice, soda water, or cola) than alcohol. It’s especially popular in the American South, and you can order it at most bars in the US. Typically you’ll see it served in either a lowball or highball glass.

The easiest cocktail recipes are the ones with the ingredients in their title, right? For a great jack and coke, you can use Jack Daniels whiskey and any type of cola. There are three tips for the very best version of this drink…ready?

Mix up the right Jack and coke ratio

You’ll find some recipes that claim a better ratio is 2 ounces Jack Daniels to 3 ounces cola. You can do this, but it makes a much stronger drink than you’ll typically get at a restaurant. Feel free to adjust the ratio to your tastes! But above is the standard ratio. Mix it up and place it in a lowball glass: and you’ve got yourself a Jack and coke.

Use lemon or citrus to balance the flavors

Most rum and coke or Jack and coke recipes don’t require lemon juice. But the flavor of any drink with Coca Cola begs for a brightness from citrus. The acidity from the lemon cuts through the sweetness of the cola.

Simply squeeze in the juice from the lemon before you add it to the drink, and it makes the flavor much more interesting! You can also use lime for a similar effect, which makes it similar to a Cuba Libre.

Clear ice takes Jack and Coke up a notch

Here’s a tip for an over the top Jack and Coke recipe: make up a batch of clear ice! Clear ice is artisan-style ice that’s crystal clear instead of cloudy like normal ice. You can make a batch and cut it into organic shapes like you’d get at a fancy bar. It’s not required, of course: it’s only for an amazing, professional looking Jack and coke.

We love making our own clear ice at home: all you need is a small cooler and 24 hours. Go to How to Make Clear Ice.

One way to make variations on a Jack and coke: change the type of Jack Daniels. Jack Daniels is a Tennessee brand of whiskey that’s actually the top selling world-wide (who knew!). The company was founded in 1875 by a man named yes, Jack Daniels, so it’s got a long history of whiskey production. While it’s most often made with the classic “Old No. 7”, there are several types of Jack Daniels you can use to vary this drink:

Jack and coke is a variation on the Rum and Coke, aka Cuba Libre. The Rum and Coke is also known as the Cuba Libre, a 3-ingredient cocktail made with lime, cola and rum that originated in Cuba in the early 1900’s. After it became popular, it became en vogue to mix any spirit with coke. The first record of whiskey being mixed with coke was 1907 (source), so it’s actually a drink with a history!

You can make a “blank and coke” with almost any spirit. In most cases, you can use the same ratio. These are great ideas for tasty but cheap drinks. Here are a few ideas to get you started — try using:

This Jack and Coke recipe makes the ideal version of this drink! Use this ratio and tips for the best easy cocktail with Jack Daniels.