THE Rum and Coke 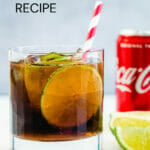 Here’s the very best rum and coke recipe: it takes this drink from basic to sublime! We’ve got tips on the right ratio, what rum to buy, and more.

The rum and coke is one of the world’s most popular cocktails: because it’s one of the easiest mixed drinks on the planet! The ingredients in its title are easy to find no matter where you are, with the popularity of this American soft drink all around the world. Sure, you can just throw together the two ingredients and call it a day. But want to make a next level version of this cocktail? Here are three tips for how to make the best rum and coke there is.

Use the best rum for rum and coke

The best way to make a stellar rum and coke is to use great rum! What’s the best rum to use? Of course, you can use any rum you have on hand. But if you’re shopping for it, here are a few tips:

Mix up the right rum and coke ratio

Add citrus to step it up

The final tip to a perfect rum and coke: add citrus for a zing! Experts may say this turns it into a Cuba Libre (and we wouldn’t argue). But the flavor profile begs for a brightness from citrus. Simply squeeze in the juice from the lime before you add it to the drink, and the acidic lime cuts through the sugar. It makes the flavor much more interesting! You can also use lemon for a similar effect.

Last tip to throw in if you want to really take your rum and coke over the top: use clear ice! What is it? Clear ice is artisan-style ice that’s crystal clear, instead of cloudy like most ice you’d make in an ice tray. You can cut this beautiful ice into large, organic-looking shapes that makes your drink look like it came from a fancy bar. Here’s the fun part: you can make clear ice at home. All you need is a small cooler and 24 hours!

Where did rum and coke come from, anyway?

What’s the history behind this famous cocktail? The Rum and Coke is also known as the Cuba Libre, a 3-ingredient cocktail made with lime, cola and rum that originated in Cuba in the early 1900’s. “Cuba Libre” means “Free Cuba” in Spanish. It’s a rallying cry that came from the Spanish American war in 1898, calling for Cuban independence from Spain.

The exact person who invented the Cuba Libre drink is unknown! But the drink became very popular in Cuba in the early 1900s when Coca Cola was exported to Cuba. It quickly spread to America and got a new name. There are a few subtle differences between them: mostly that the Cuba Libre uses lime juice, giving it a brighter flavor.

Once you’ve made this best rum and coke, there are so many variations to try! You can make a “blank and coke” with almost any spirit. In most cases, you can use the same ratio. Here are a few ideas to get you started — try using:

Here’s the very best rum and coke recipe: it takes this drink from basic to sublime! We’ve got tips on the right ratio, what rum to buy, and more.

Love mixing up cocktails with rum? Here are our favorite iconic rum drinks everyone should try: