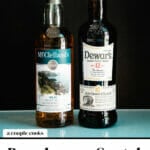 Bourbon vs Scotch: what’s the difference? Here’s a quick guide to the main differences between these types of whiskey (and some cocktails!).

Bourbon vs Scotch: what’s the difference? These two styles of whiskey could not be more different. Or should we say…whisky? Here’s what to know about the spelling differences, what makes each one unique, and a few popular cocktails to make with each one!

Bourbon vs Scotch: what’s the difference?

The flavor: what does Scotch taste like vs bourbon?

Bourbon is considered easier to drink vs Scotch, which has a very distinct flavor. The breakdown in flavors is:

Here are the most popular Scotch whiskey cocktails

Make a Bourbon Manhattan, or the Rob Roy: a Manhattan made with Scotch whisky! This booze-forward cocktail is a sophisticated way to enjoy a good Scotch.