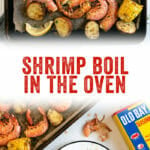 Want a shrimp boil recipe that’s easy enough for a weeknight? Bake it! This sheet pan shrimp boil in oven is simple to make and has serious flavor.

I vividly remember my first shrimp boil: paper on the table, the jumble of Old Bay-spiced shrimp and potatoes, everyone eating with their fingers as the sun began to disappear. Ever since, the shrimp boil has held my heart. We make it for birthdays and weddings and family vacations. But why not harness the magic of the shrimp boil for an everyday meal? This sheet pan shrimp boil in oven is an easy way to make it on a weeknight: no large pot or fire required! Keep reading for how to do it.

How to make a shrimp boil in oven

The concept of a shrimp boil in the oven is just that! Instead of boiling the veggies and shrimp like in a classic shrimp boil, you’ll bake them on a sheet pan with olive oil and some tasty seasonings. Like many sheet pan dinners, this requires starting the longest cooking vegetable in the oven first: in this case, the potatoes. You’ll bake, then add the corn to the same sheet, bake some more, and then add the shrimp.

To make this sheet pan shrimp boil as easy as possible, you’ll mix the potatoes in a bowl with the seasonings, then use the same seasonings and same bowl to mix the corn. Then you’ll use the same bowl and seasonings to mix up the shrimp! So you’ll only dirty one bowl in the process: and you can start to memorize the seasoning mix too.

Here’s how to make a sheet pan shrimp boil in oven (see the full recipe below):

And that’s it! What results is a shrimp boil full of oven-roasted goodness. The veggies have browned and caramelized goodness, salty and seasoned with the nuance of cozy Old Bay seasoning. And the shrimp are perfectly tender.

How to serve a sheet pan shrimp boil

Once you’ve made a shrimp boil in the oven: how to serve it? Do not even think about using plates and silverware! They’re strictly forbidden here! If you’d like to serve it like a traditional low country shrimp boil, you can spread butcher paper of newspaper over your table. Then pour the shrimp boil goodness right onto the paper. Enjoy by eating with your hands! And of course have lots of napkins handy nearby.

You also can allow the baking sheets to cool off, and serve directly from the cooled baking sheets. Or serve on a large platter.

This recipe is perfect for a family dinner idea on a weeknight, or special enough for entertaining, paired with our smash hit Easy Vegan Cornbread.

Side dishes to serve with a shrimp boil

When we made this shrimp boil in the oven, we served it as a special meal for my teen refugee mentee from Congo. It was perfect for a late summer meal on the patio, and a fun way to build our relationship! We researched side dishes to serve with a shrimp boil and came up pretty short. Most side dishes require a plate, which ruins the vibe.

Since we were feeling creatively uninpsired, we decided to just skip side dishes and go with dessert instead! So we served this shrimp boil followed by our Classic Strawberry Shortcake. It was the perfect carefree ending to a festive meal.

Serving this sheet pan shrimp boil with cornbread or bread seem like good options: do you have ideas on side dishes that would work? (Let us know in the comments below.)

What type of shrimp to use?

For this shrimp boil in oven recipe, we recommend using large shrimp with the tail on for the best presentation. We used the size 16 to 20 count, which are quite large. We’d suggest buying shrimp with the shell on that is already deveined. Then you can remove the shell after cooking the shrimp, but leave the tail on. (If your shrimp are not deveined, here’s How to Devein Shrimp.)

A note on sustainable shrimp

This recipe is included in our Pescatarian Meal Plan! Check it out for recipes for 1 month, including a meal planning spreadsheet download.

This sheet pan shrimp boil in the oven is pescatarian, gluten-free, and dairy-free.

Want a shrimp boil recipe that’s easy enough for a weeknight? Bake it! This sheet pan shrimp boil in oven is simple to make and has serious flavor.