Seafood Paella on an Open Fire 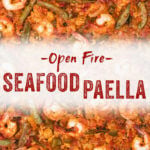 This seafood paella recipe made over an open fire is perfect for entertaining a crowd! It serves eight; pair it with Spanish cheese and sangria.

Have you tried making paella over an open fire? Because what’s more fun than gathering around a fire, smelling the intoxicating aroma of dinner, and then all eating out of the same dish? It looks showy, but we promise: you can learn to make this traditional Spanish dish at home. Alex and I have a long history of learning how to make paella that goes back to my university days 15 years ago, and ends a few months ago in Valencia, Spain. This recipe was born of all those memories. And our years of research paid off when a Spaniard friend tasted this recipe and gave it two thumbs up. Keep reading for the story, and how to make this seafood paella recipe over an open fire!

Want to cook it on the stovetop? Try our Classic Spanish Paella.

A love story with paella

I ate my first paella 15 years ago in Madrid as a young university student. My host mother beamed from head to toe as she presented her homemade paella to me for Sunday dinner. At the time I didn’t know a thing about food, but I could sense that paella was something truly special. Paella is a Spanish dish that originated in Valencia and is now eaten all over the world. As an American, I’ve been happy to see more and more people in my country now know the joy of paella.

After introducing paella to Alex back in the early 2000’s, we started to make it regularly as a celebratory food. Valentine’s Day? Paella. Special visitor in town? Paella. We watched videos of Spanish chefs and learned about paella pans, using saffron, and finding the right type of rice. We cooked from all sorts of recipes from authentic sources. We developed a few seafood paella recipes and vegetarian paella spins for this website. And of course, we have a veggie paella recipe in our cookbook, Pretty Simple Cooking. Paella became our special thing (well, that and artisan pizza).

A few months ago, I was finally able to return to Spain with Alex (and our toddler Larson) so he could experience Spanish paella firsthand. And where to go than the birth place of paella itself, Valencia? One of our favorite memories of the trip was eating paella in a tiny town outside of Valencia. Alex searched the internet for an authentic paella joint, and we showed up a Sunday afternoon to an unassuming concrete building in a sleepy town. To our surprise, it was full of locals enjoying massive paella pans with their families!

We ordered a “paella for 3” with our son Larson, and had a fantastic afternoon cleaning up our huge pan. That paella had chicken, meatballs, snap peas, and artichokes; the snap peas in this recipe are an homage to that paella. Another fantastic paella from this trip was a seafood paella in Barcelona–this seafood paella is a mashup of the two.

This paella recipe was developed using our background knowledge of years of research, interviews with Spaniards and Spanish chefs, and lots of practice. We’ve used most of the textbook equipment and ingredients. With the magic of the internet, most of this equipment and ingredients are readily available for today’s American kitchen. Though it may seem like a lot if you’ve never tried it before, once you’ve practice you’ll find you can hone your paella over time. This is a seafood paella (paella de mariscos) similar to ones we had in Valencia and Barcelona.

Is this an authentic seafood paella recipe (paella de mariscos)?

What is a fully authentic paella recipe? Spaniards themselves differ on this topic: we’ve eaten paella in Valencia, Barcelona, and Madrid and all of them have been vastly different. If you’re hard core about it, the traditional Valencian paella has chicken, rabbit, garrofó (a variety of lima bean), saffron, and rosemary. But paellas of all flavors are served throughout Spain: it’s a traditional dish that has many variations.

This recipe has been honed over years of learning from authentic sources. Of any of the paella recipes we’ve developed, this one is the closest to an authentic paella. We’ve used a traditional paella pan, saffron, pimentón, bomba rice, and an open fire. Even better, our friend who’s a Spaniard tasted this recipe and gave it two thumbs up! That’s the best endorsement we could imagine.

How should I cook paella over an open fire?

For this seafood paella recipe, Alex built a custom makeshift paella grill using 8 concrete blocks from our hardware store: and it only cost $10! We then topped it with the grate from our standard grill. This made it easy to cook the paella on our deck. You can also cook it over a campfire using whatever method you have to suspend the grate 8 to 10 inches above the fire. It’s nice to use a hardwood like hickory or oak to easily maintain the fire temperature, but you can use any wood.

Can I use my grill to cook paella?

If your grill is big enough, you can cook paella on a grill. However, on a charcoal grill it can be hard to maintain the correct temperature for the paella. If you’d like to use a grill, use our Simple Grilled Seafood Paella recipe that uses a smaller paella pan and serves four.

What is the best paella rice type?

The most authentic paella rice type is called bomba rice; it’s a white short grain rice. In the past in our paella recipes, we’ve “cheated” and used Arborio rice, which is easier to find. However, for this recipe we tried bomba and felt like it had more consistent results. Luckily these days, you can purchase bomba rice online.

What is the best paella pan?

A paella pan is a large round, shallow pan with handles used for cooking paella. Since it’s so shallow, it allows the rice to cook consistently instead of becoming watery and gummy as it might in a skillet. The best paella pan for this seafood paella is one that is 16 to 18 inches. Do not attempt to make this recipe in a smaller pan! It is customized for this size of pan and will serve 8 people. Here’s the large paella pan we use.

Note: Paella pans are made of carbon steel and will rust. Make sure to dry the pan completely after cleaning it, and rub it with a bit of vegetable oil to prevent rusting.

Do I have to use saffron and pimentón in paella?

If you want it to be close to authentic paella: yes, use saffron! Saffron brings an earthy flavor and a beautiful color to the dish. Smoked paprika, called pimentón, gives the dish more color and a smoky undertone. (Here’s more about smoked paprika and more recipes that use it!) Saffron is one of the most expensive spices, so it’s a bit of a splurge. However, you’ll only use small bits at a time: this recipe only uses 1 pinch. Pimentón is a fantastic addition to your spices: we actually use it in many of our recipes outside of this seafood paella to bring a smoky flair in vegetarian dishes. You should be able to find both at your local grocery store. If not, we’ve linked to a saffron you can find online below.

One of the unique things about paella is that once all the ingredients are added to the pan, you do not touch it! No stirring is allowed. This allows the broth and spices to boil through the rice, leaving everything perfectly cooked. Traditionally, there should be a lovely crust formed on the bottom of the rice called the socarrat. It’s difficult to achieve the perfect socarrat because so much depends on the exact timing and the hotness of your fire. If you don’t get the perfect socarrat, don’t worry! Each time you cook this seafood paella, you’ll learn new things about perfecting your paella technique.

What should I serve with this seafood paella recipe?

We recently had a paella party where we invited 3 other couples to eat this open fire seafood paella recipe with us. We started with a cheese plate featuring Spanish cheeses (like Manchego) and cured meats, and some marinated olives. During that course we enjoyed some Spanish white wine (Albariño), but sangria or herb infused cucumber water would be another great choice! We then served the seafood paella with a green salad, and finished with churros (takeout style from a nearby restaurant).

Making this open fire seafood paella recipe has a few specific techniques and tools, but once you have the general idea it’s pretty simple to make. We love cooking over an open fire and enjoying time with our guests eating appetizers, then all digging into the pan together. Let us know if you have any questions!

A few other Spain inspired posts and recipes:

Related: Try using our Homemade Vegetable Broth for this recipe!

This seafood paella recipe is…

This seafood paella recipe made over an open fire is perfect for entertaining a crowd! It serves eight; pair it with Spanish cheese and sangria.

*The best paella pan for this recipe is one that is 16 to 18 inches. Do not attempt to make this recipe in a smaller pan! It is customized for this size of pan and will serve 8 people. Also, paella pans are made of carbon steel and will rust. Make sure to dry the pan completely after cleaning it, and rub it with a bit of vegetable oil to prevent rusting.

Outside of this open fire seafood paella, here are a few more healthy seafood recipes and fish recipes: