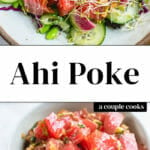 The classic Hawaiian ahi poke features raw tuna with soy sauce (shoyu), garlic, and onion. It’s rich and buttery, perfect with rice or as an appetizer!

Poke is one of life’s greatest pleasures. Taking one bite is an explosion in your mouth. You get the silky, buttery texture of the ahi tuna (and you wonder if you actually did bite into butter). There’s the sharp umami of the soy sauce, the crunch of the onion, the pungent ginger, and that sexy garlicky essence…really, there’s nothing like it! Poke is a Hawaiian food that’s become increasingly popular here in the US. Here’s what you need to know about how to make ahi poke at home!

Looking for a poke bowl with rice & veggies? Go to our classic Poke Bowl Recipe.
Cooking for plant based eaters too? Make Vegan Poke.

Poke means “to slice” or “cut crosswise into pieces in Hawaiian. It refers to the raw fish that’s cut into cubes. It originated from Hawaiian fisherman who would season leftover parts of their catch for a snack! Poke is a Hawaiian-American food, but much of its flavor is influenced by Japanese cuisine: soy sauce, green onions, and sesame oil.

You can make poke out of any raw fish, like raw salmon or octopus. But the most popular fish used for poke is yellowfin tuna or ahi tuna. You’ll see this called ahi poke or tuna poke. What is shoyu ahi poke? Shoyu is the word for soy sauce in Japanese, so shoyu ahi poke means poke made with ahi tuna and soy sauce. Basically, they’re all words for the same thing!

The most important part of ahi poke is…you guessed it, the ahi tuna! You’ll want to find the very best ahi tuna you can find. If you’re making this recipe, we’ll assume you’re also a fan of sushi. You’ll be using the same quality of fish used at your favorite sushi joint: labeled for use for either sushi or sashimi (the raw fish served without rice). Here are a few things to keep in mind when you buy tuna for poke:

So what’s in poke? It’s very simple, and the quality will 100% depend on the quality of your ahi tuna. Once you’ve got your fish, you’ll marinade it in a mixture that includes:

Marinading your tuna poke (and a shortcut!)

To get the flavor fully infused into the ahi poke, most recipes call for at least 1 hour of marinade time. But what if you want to eat it right away? Alex and I tasted our ahi poke right away, after 30 minutes, and after 1 hour to see how the flavor changed. Here’s the down-low on marinading:

How to serve ahi poke

There are two main ways to serve ahi poke: as an appetizer, and as a poke bowl!

Want more ideas? There are great resources from Hawaiian chefs:

The classic Hawaiian ahi poke features raw tuna with soy sauce (shoyu), garlic, and onion. It’s rich and buttery, perfect with rice or as an appetizer!

*It tastes great either way. The traditional poke is marinaded at least 1 hour. If you’re looking for a quick meal, it’s very good right away too.