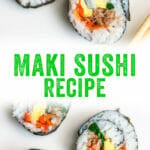 Maki sushi is a sushi roll with the seaweed on the outside: and they couldn’t be more fun to make! Here’s a sushi recipe that’s easy to make at home.

Sushi is one of Alex and my favorite foods ever. When we first started becoming interested in food, sushi quickly jumped to the top of our “best eats” list and has stayed there ever since. While we usually order out for sushi, we’re so, so excited to bring you a recipe for how to make sushi at home! This maki sushi recipe comes from the NEW cookbook Aloha Kitchen by our friend Alana Kysar, and it is incredibly tasty and surprisingly doable. Keep reading for the maki sushi recipe and more about the book!

About the book: Aloha Kitchen

Aloha Kitchen is the new beautiful cookbook by Maui native Alana Kysar featuring the beautiful cuisine of Hawai’i! The book is chock full of gorgeous favorites, like poke, shave ice, loco moco and more. Alana explores the cultures that have influenced the local foods of Hawai’i over time, and it makes us want to jump on a plane this instant to visit! Hawai’i is a melting pot of many cultures, and what reflects that more than the cuisine?

As we paged through the book, of course the sushi caught our eye. Alana graciously let us use her maki sushi recipe as a preview: and man is it delicious! Here’s a link to the book so you can see more! (Note: the book includes meat but has several veggie options — and there’s a vegetarian sushi recipe version below!)

Get the book: Aloha Kitchen: Recipes from Hawai’i by Alana Kysar

What is maki sushi?

What is maki sushi? Maki sushi is simply a sushi roll. It’s rolled sushi with seaweed on the outside and rice and fillings on the inside. Maki sushi can be filled with raw fish, cooked fish, or other vegetables and sauces. There is also an “inside out” variation on maki called uramaki; it has the rice on the outside of the roll rather than the seaweed.

Nigiri sushi, on the other hand, is raw fish on top of rice, with no seaweed wrap. It’s usually in a sort of rounded oval of rice, and the raw fish sits on the top. This post will show you how to make a sushi roll: maki sushi!

How to make sushi

Making maki sushi is surprisingly accessible. Though you’ll need to set aside about an hour and a half, it’s well worth it. Sushi is perfect food for celebration, and what is more celebratory than a homemade sushi roll? Now, there are a few tips for how to make sushi: here are a few things to consider before you start:

Get a sushi rolling mat (or find an alternative).

In order to get those perfect tight rolls, you need a sushi rolling mat. Alex and I actually used a bamboo placement that we randomly had on hand — see the photo! But if you’re ready to go all in, here’s a sushi rolling mat we recommend that’s super inexpensive: Sushi making kit $7

Cook and fan the sushi rice.

A good sushi recipe is all about the rice! We used sushi rice and cooked it in our Instant Pot, but you can use the stovetop as well. (Use our Instant Pot Rice recipe with 2 cups sushi rice and 2 ½ cups water, and follow the instructions for white rice.) While you cook the rice, you’ll heat up some rice vinegar, sugar and salt, then pour this over the rice once it’s done. Then you’ll toss, fan and fluff the rice with a rice paddle to get it to just the right consistency and cool it to room temperature. It sounds a little funky, but it works and makes the perfect sushi rice.

For this maki sushi recipe, Alana calls for lots of delicious fillings: quick pickled carrots, watercress, an omelet, and shoyu tuna. The tuna used in this recipe is canned, cooked tuna, so it’s a cooked sushi roll! You could also use raw tuna (which we LOVE as well): try to find a sushi-grade raw Ahi tuna. (We’ve found sushi grade fish frozen at our local grocery — this is what we used in our 5 Minute Seared Ahi Tuna recipe.) You can customize the toppings as you like. We noted below we also tried a version with a spicy mayo we made with mayonnaise and Sriracha — it was very delicious but also a little squishy: so just be careful not to use too much.

Rolling the sushi is a little scary at first. But a sushi recipe is like pancakes: the first one isn’t so pretty, but still tastes good! You’ll get the hang of it as you go. Use your sushi rolling mat to get the roll started, then roll just with your fingers. Make sure to give it a bit of pressure as you roll, which will make for a tight sushi roll.

This maki sushi recipe is easily made vegetarian: just omit the tuna and double the omelet filling! An omelet is perfect for vegetarian sushi since it gives a nice texture contrast to crunchy raw vegetables. We’d add a few more pinches of salt into the omelet too if it’s going to be the main filling. And perhaps add some of that spicy mayo mentioned above too!

And that’s it: how to make maki sushi recipe!

Let us know if you give it a try in the comments below. Good luck! Thanks again to Alana for the fantastic recipe and make sure to check out her book.

Outside of this maki sushi recipe, here are a few more recipes we love for special occasions:

Maki sushi is a sushi roll with the seaweed on the outside: and they couldn’t be more fun to make! Here’s a sushi recipe that’s easy to make at home.

For the sushi rice

For the omelet (for vegetarian sushi, double this and omit the tuna)

For the quick pickled carrots

For the maki sushi