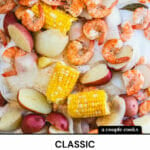 Here’s how to make the best shrimp boil! This easy meal of corn, potatoes and shrimp is perfect for a crowd. No plates required!

Here’s a meal that’s special every time you serve it: a Shrimp Boil! This classic American seafood boil is one of our favorite meals to serve to a crowd because everyone always loves it. Boil up potatoes, corn, onions and shrimp in a flavorful broth, then dump them out onto a table lined with parchment paper. No plates, no silverware: just you, your hands and a can of Old Bay seasoning. There’s something magical about the experience: and it’s a hit every time. We make it at the lake house in the summer, and camping in the fall. It’s perfect for eating outdoors as the light gets low and the fire is crackling. But you can make it in your kitchen too! Here’s everything you need to know about making a shrimp boil.

First of all: what’s a shrimp boil?

A shrimp boil also known as a seafood boil: an American tradition that comes from the South and Northeast. Seafood boils can have all sorts of seafood: crab, crawfish, clams, etc. Usually corn and red potatoes are boiled along with the seafood in a broth flavored with lemon and bay leaves. The best part? There are no plates or silverware for a shrimp boil. It’s traditionally served on a table lined with paper, often with Old Bay seasoning (more on that, below!).

What you need for a shrimp boil

How to make a shrimp boil on the stove

The method for a shrimp boil is this: you’ll make a flavorful broth with water and spices, then boil each of the components separately. Why separately? Here’s the important thing to note. The largest pot most cooks have is an 8 quart pot. You have to cook each component on its own because you can’t fit the volume of all the food and broth in the pot at once. This makes enough for 4 to 6 servings. (Now if you have a very large 5 gallon pot, you can cook everything at once: go to the section below!) Here are the basic steps for a shrimp boil in an 8 quart pot:

Alternative method: use a 5 gallon pot!

What is Old Bay? What’s a substitute?

The best part of a shrimp boil is the Old Bay seasoning (in our humble opinion, at least!). This tasty seasoning is famous for its use in seafood boils. Don’t even think about leaving it out when making this shrimp boil! It brings the classic flavor that’s traditional for this special dish. Here’s what to know:

The best part about making a shrimp boil is serving it! Here’s what to know:

Side dishes to serve with a shrimp boil

A shrimp boil is such a unique meal, it can be hard to figure out what to serve with it. You’re not eating on plates, so it doesn’t quite make sense to eat a salad or coleslaw. But you can pull out small side plates if you’d like to serve traditional side dishes! Here’s what we suggest serving with a shrimp boil:

Got leftover shrimp? A great way to use any leftovers the next day is to make this Creamy Shrimp Salad (like a tuna salad but with shrimp!). You’ll be surprised at how satisfying it is.

This shrimp boil recipe is…

Here’s the best shrimp boil recipe! This easy meal of corn, potatoes and shrimp is perfect for a crowd. No plates required!

*If desired, replace 1 pound shrimp with 1 pound kielbasa sausage. Boil the sliced sausage for 12 minutes with the potatoes and onions.

**Large pot method (works for open fire or stovetop): This method cooks everything separately because the largest pot most cooks have is 8 quart. If you have a very large pot that’s 4 to 5 gallons, you can double the recipe and cook it all in one pot. Cook the potatoes and onions for 8 minutes, add the sausage and cook for 6 minutes (if using), add the corn and cook for 4 minutes, then add the shrimp and cook for 2 minutes.