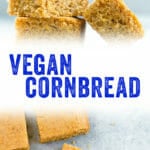 Want a variation? Try it in a cast iron skillet with Skillet Cornbread!