How to Boil Shrimp 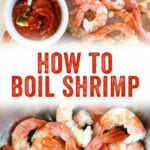 Wondering how to boil shrimp? Boiling up a batch is perfect for shrimp cocktail and comes out tender and juicy every time.

Why would you boil shrimp, when you can cook it on the stove in a flash? Turns out, boiled shrimp is a thing. And it’s really good. The most popular way to use boiled shrimp is for shrimp cocktail, but you could boil it for any type of preparation. (Of course you can also do a shrimp boil, but that’s a whole different recipe.) The advantage of boiling? It keeps well at room temperature, making it perfect to sit out on a platter of shrimp cocktail while entertaining. Wondering how to boil shrimp? Here’s our simple method.

How to boil shrimp

First things first: how long do you boil shrimp? The cook time is just 2 minutes, until they are pink and cooked through! It’s about the same amount of time that it takes to cook on the stove. However, you’ll have to factor in the time to boil a large pot of water. And if you’re using shrimp with the shell on (which we recommend), you’ll need to remove the shells after cooking them. The overall time it takes for the entire process is about 15 to 20 minutes.

Here are the ingredients you’ll need to boil shrimp:

You’ll bring a large pot of salted water to a boil with some fresh lemon juice. Once boiling, add the shrimp and boil until they’re pink and cooked through, about 2 minutes. Remove the shrimp to an ice bath, which is a bowl of water and ice. This will stop the cooking immediately, leaving the shrimp perfectly tender. If you cooked the shrimp with the shell on, remove it — but if you’re serving for shrimp cocktail, we like to leave the tails on. You can flavor the shrimp with a bit more kosher salt and lemon to taste: then it’s ready to go!

What are the calories in boiled shrimp?

Shrimp are a low calorie food. Here are the calories in boiled shrimp:

What shrimp to use for boiling?

It all depends on how you’re planning to use it. If you’re going to make shrimp cocktail, use large shrimp with the tail on for the most stunning presentation. The shrimp pictured here are the size 16 to 20 count.

We’d recommend boiling shrimp with the shell on for the best flavor. It’s also helpful to buy shrimp that has already been deveined. (If your shrimp are not deveined, here’s How to Devein Shrimp.)

What about boiling fresh vs frozen shrimp? Either fresh or frozen works for this recipe! The shelf-life of fresh shrimp is only a few days, but frozen shrimp lasts for several weeks. Also, a myth about fish is that “fresh is best.” As soon as an animal dies it begins to decompose; freezing suspends this process. If a fish is frozen when it was caught and stays frozen until it gets to your kitchen, it will be higher quality than a raw fish that has taken a week to get to your plate.

If you use frozen shrimp for this recipe, what’s the best way to thaw it? Here are a few of the best options:

If you’re looking for shrimp cocktail, we’ve got a killer cocktail sauce! Shrimp cocktail is a great option as a healthy appetizer recipe, and perfect for celebrations like the holidays or New Year’s Eve. Here’s our delicious Homemade Shrimp Cocktail Sauce!

Well, that’s a different thing altogether! The cooking method is the same, but a shrimp boil uses potatoes, corn and shrimp together in the same pot with spices (usually Old Bay). We’re working on a recipe for a shrimp boil recipe you can use for entertaining, and a sheet pan version for weeknight dinners. Stay tuned!

This boiled shrimp recipe is…

Wondering how to boil shrimp? Boiling up a batch is perfect for shrimp cocktail and comes out tender and juicy every time.

Outside of boiling, here are some of our favorite ways to prepare it: