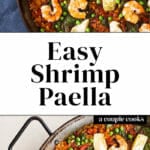 This easy shrimp paella recipe is stunning and works for entertaining or a weeknight dinner. Here’s how to make this traditional Spanish recipe!

This post was created in partnership with Simply Organic. All opinions are our own.

Show of hands: who loves a good date night in? Much as I love the dress up-dinner-drinks routine, some my favorite memories are nights where Alex and stayed in cooking together. It’s not always pretty, mind you! There are shirts splattered with tomato sauce and burnt bread and broken pizza stones. But there’s something so comforting about pouring a glass of red wine, turning on some tunes, and ultimately chowing down on the fruits of your own labor. Date night in — it’s a thing. And the perfect date night in recipe? This easy shrimp paella. Of course — it works for weeknights and family dinners, too! Here’s why you should make it.

Four years ago, Alex and I started our date night in tradition with this easy vegetable paella. I discovered paella (Pie-A-Yah) while I was studying in Spain in college. It’s a traditional Spanish recipe featuring rice, vegetables, and seafood or meat, flavored with spices like smoked paprika and saffron. Paellas are celebratory, many times cooked over an open fire. Some of my favorite memories in Spain are sharing paella with new friends. Our newest take on paella? This shrimp paella recipe covered with juicy shrimp and tangy artichokes.

The stars: smoked paprika and turmeric (or saffron)

As you know, we eat mainly a whole food plant based diet over here (or really, the Mediterranean diet). But occasionally we’ll splurge with a little seafood or meat. Alex was set on creating an easy shrimp paella recipe, since it’s traditional for a seafood paella and looks stunning as well. I must say I became a believer: the dish turned out as delicious as it is beautiful.

What makes this shrimp paella is the spices! First off, there’s the smoked paprika, called pimentón in Spanish. (Here’s more about smoked paprika.) It lends a sultry, smoky flavor that’s instantly intriguing. We have several sources for smoked paprika, but Simply Organic is our favorite. The other key spice for the dish is traditionally saffron. But since it’s the world’s most expensive spice, we went with a common substitute: turmeric! It gives a bit of earthy flavor and a brilliant yellow color. (Here are more turmeric recipes, if you’re interested.)

How to make shrimp paella: the basic steps

Here are the main steps for making a shrimp paella (or go to recipe below):

Do you need a paella pan to make this recipe?

You’ll see in the photos that we’ve used a paella pan when we made this shrimp paella recipe. But is it required? Nope! Don’t worry if you don’t have a paella pan; a large skillet works just as well! A paella pan is shallower than a skillet, so it cooks a bit differently. But it can be hard to balance it across the burners on your stove, depending on the size. While purists would argue that paella is only cooked in a paella pan, for an easy paella your largest skillet will do.

Outside of this easy shrimp paella recipe, here are some of our favorites for different occasions:

This shrimp paella recipe is…

This easy shrimp paella recipe with artichokes is stunning and works for entertaining or a weeknight dinner. Here’s how to make this traditional Spanish recipe!

Note: A large skillet works for this recipe, but you can use a paella pan if you have it! We placed ours across two burners to get even heat. This recipe serves enough for 4, so if you make it for a date night you’ll also have leftovers!

Outside of this shrimp paella recipe, here are a few more healthy seafood recipes: