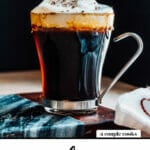 Have you tried the revelation that is Spanish coffee? Flaming Spanish coffee, that is? The name is a bit of a misnomer. It’s actually an American spin on the Spanish concept of carajillo: spiked coffee. But this drink is extra-special. It’s got a caramelized sugar rim and is spiked with Kahlua, rum, and orange liqueur…and topped with hand-whipped fluffy whipped cream! The burnt caramel, citrus, bitter coffee and sweet cream all combine into a literal symphony of flavor. You’ve gotta try this one!

What is Spanish coffee?

Why’s it called Spanish coffee, when it’s really American? Well, the concept of spiked coffee spans cultures and liquors, from traditional Irish coffee to amaretto coffee. The Spanish version of spiked coffee is called carajillo, and it’s popular in Spain and Latin American countries like Cuba, Colombia and Mexico. Each country uses its own liqueur; in Spain it’s brandy; in Mexico it’s Licor 43, a bright yellow vanilla liqueur.

Spanish coffee is an American adaptation of the carajillo, invented at Huber’s Bar in Portland, Oregon in the 1970’s by co-owner James Louie. The drink is made tableside by lighting high proof rum on fire to caramelize the glass’s sugar rim. Then the glass is filled with coffee, Kahlua and Triple Sec, and topped with whipped cream and nutmeg. It’s a true dramatic spectacle designed to put on a show: and we’ll admit this drink is totally worthy of it.

How to make the caramelized rim… two methods!

This Spanish coffee recipe calls for lighting rum on fire to make the caramelized glass rim. Now, we’re always up for playing with fire at home (safely, mind you). But when we tried this trick using our thick glass Irish coffee mug, it shattered when the coffee was poured in! The flaming method also takes a bit of practice, and it’s not practical for a crowd.

Because of this, we prefer to use a kitchen torch for our method: like the kind you’d use to caramelize crème brulee. Here’s more about the two methods:

Note: If you end up buying a kitchen torch, you can use it for so many things! Try it for caramelizing creme brulee, charring crust on a pizza to look like a wood-fired oven (our favorite trick!), or melting cheese on nachos (to add smoky flavor).

Sure, you can buy Cool Whip. But if you’re going to the trouble of making a Spanish coffee recipe, homemade whipped cream takes it up a notch! You’ll just need heavy whipping cream and powdered sugar to sweeten it. it takes only a minute or two to whisk up by hand. Or, you can use coconut cream or coconut milk as a dairy-free option. Here are the various methods:

How to make Spanish coffee

Now that you’ve got your kitchen torch and selected your whipped cream method…this Spanish coffee recipe is a breeze! Here’s the general outline of the steps (or jump to the recipe below):

Variation that’s even easier: the Carajillo!

If you like this Spanish coffee recipe, you’ll love a Mexican-style Carajillo. As we mentioned, Spanish coffee is actually an American adaptation of this Spanish invention. But Carajillo is also very popular in Mexico, where they spike the coffee with Licor 43 instead of brandy.

Licor 43 is a bright yellow vanilla liqueur made with 43 herbs and spices. Add it to coffee, and it’s got loads of nuance and intrigue. If you top with whipped cream like the Spanish coffee, the two taste very similar. We’d highly recommend giving it a try: or making it instead of this recipe if you’re scared off by the caramelized rim. Go to Carajillo (Mexican Spiked Coffee).

There are so many other tasty after dinner and dessert drinks to try in addition to Spanish coffee! Here are some favorites:

When to serve Spanish coffee

Spanish coffee is a showy dessert drink for sipping on after a meal! Serve it as a:

**The traditional method is to place ¾ ounce 151 rum in the glass first, light it on fire, and tilt the glass to allow the sugar to caramelize. This method doesn’t require a torch, but if you use a thicker glass like an Irish coffee mug it can shatter (which happened to us!). The torch method is safer and makes it easier to serve this drink for multiple people. You can also omit the sugar rim if you prefer; the flavor is still great. Or, you can try the traditional method at your own risk; if you do, add the 151 rum, caramelize the edge, then add the coffee, Kahlua, and Triple Sec (omit the aged rum).