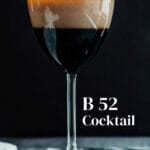 Here’s how to make the B 52 cocktail, aka B52 shot! Layered Kahlua, Irish cream, and Grand Marnier make the perfect sip.

Here’s a layered cocktail that’s mighty tasty: the B 52 cocktail! Yes, the B52 shot might be a little…pedestrian, some might say. But the pairing of Kahlua coffee liqueur, sweet Irish cream, and orange liqueur is close to perfection. The combination is so classy, we’ve recreated it here as a slow sipping after dinner drink in a stemmed cocktail glass. You can drink it either way, but we prefer enjoying it rather than downing it as a shot. Here’s a little more about this classic drink and both ways to make it!

B 52 cocktail ingredients (aka B52 shot)

The B 52 cocktail is a layered shot comprised of coffee liqueur (usually Kahlua), Irish cream (usually Baileys) and orange liqueur (usually Grand Marnier). The most popular origin story for the drink is that it was invented in 1977 by Peter Fich at the Banff Springs Hotel in Alberta, Canada, who named it after the band The B-52s. There are several other competing stories, which is true with lots of other classic cocktails: everyone wants a claim!

The B52 shot then layers equal parts of these ingredients, which each float in separate layers due to their density:

This classic pairing of coffee, cream and orange became an instant hit, and it’s spawned all sorts of variations, including a flaming B52 shot. (We won’t cover that once here, since we broke a glass making flaming Spanish coffee…but that’s a story for another day!)

How to make the layers in a B52 shot

How do you get those beautiful layers of separation in a B52 shot? Pour the liquor over the back of spoon! Here’s how it works:

The best way to make a B 52 cocktail? In a cocktail glass. Honestly, as cocktail connoisseurs and homemade mixology experts, we’re not really B52 shot people. Shots are designed to ingest a lot of alcohol in seconds: whereas we’re all about slowing down and enjoying the art of homemade cocktails.

So, we’re all about a B 52 cocktail: make it up and slow sip on it in a cocktail glass! Here’s what to know about the differences:

You can use any type of coffee liqueur for a B 52 cocktail. The most popular type that you might already have on hand for the B52 shot is Kahlua. Here’s more about it and a few other alternatives:

For the orange liqueur: Grand Marnier is best, Cointreau is a substitute

There are lots of different types of orange liqueur, and the differences can be a little confusing. Here’s a breakdown of what’s best to use in a B52 shot, and what are some good alternatives:

When to serve a B 52 cocktail or shot

A B 52 cocktail is a fantastic after dinner drink, but it works anytime. Serve it as a:

Here’s how to make the B 52 cocktail, aka B52 shot! Layered Kahlua, Irish cream, and Grand Marnier make the perfect sip.