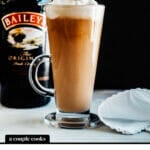 Try Baileys coffee: a delicious Irish coffee with Baileys Irish cream! This spin on the classic is lusciously creamy and cozy.

Are you an adoring fan of Baileys Irish Cream? Then this spin on the Irish coffee with Baileys is a must try…Baileys Coffee! Adding a splash of this whiskey-flavored creamy liqueur is absolutely what a cup of hot coffee needs. Float a fluffy pile of homemade whipped cream on top, and it’s a lusciously creamy coffee cocktail that will warm your soul. Here’s what to know about this classy spin on the classic.

Baileys coffee is a spin on Irish coffee using Baileys Irish Cream instead of cream and sugar. Irish coffee is a classic cocktail you probably already know: warm coffee with a shot of Irish whiskey, topped with whipped cream. The modern version was invented in the 1950’s in Ireland. What you may not know is there were several spiked coffee predecessors in early 19th century Austria and France, and later in Cuba and Latin America. Spiked coffee is also known as carajillo in Spain and Latin America (we’ll get to that later).

The Irish coffee became so popular, it’s been standardized as part of the list of IBA official cocktails. This means it has an “official” definition of how to make it. This Baileys coffee spin simply swaps in Baileys Irish Cream for heavy cream and sugar. For Baileys coffee you’ll need:

Best coffee for Baileys and coffee

You can use your favorite coffee bean and method for this Baileys coffee: anything goes! But it will taste different depending on your method. Here’s what we’d recommend:

Want to make an over-the-top delicious Irish coffee with Baileys? Make homemade whipped cream! It’s amazing how much tastier and fluffier this stuff is vs Cool Whip. Of course, we won’t judge if you’re in a hurry: but it takes just 2 minutes to whisk up.

Last tip for Baileys Irish Cream coffee: serve it up in an Irish coffee mugs! Of course, you can use whatever cup or glass you like. But a nice thing about the special mug is that it holds exactly the size of this drink: and it feels more fun drinking it! Here are the Irish coffee mugs we use: they’re sleek and are exactly the right size to fit the drink recipe.

There’s actually a vegan version of Baileys! It’s called Baileys Almande and it’s made with almond milk instead of cream. You can use this, then top the drink with Vegan Whipped Cream. Make it at home using coconut milk and it comes out very delicious.

Interestingly, Baileys Irish Cream is the most popular liqueur sold worldwide! Yep, there’s nothing like this popular creamy liqueur. Here’s a little more about it, and how to use up a bottle after this Baileys Coffee:

When to serve Baileys coffee

This creamy coffee cocktail works anytime! It’s low alcohol, so it’s perfect for brunch: but it works for after dinner or anytime in between. Serve it as a:

Try Baileys coffee: a delicious Irish coffee with Baileys Irish cream! This spin on the classic is lusciously creamy and cozy.

*For a vegan variation, use Baileys Almande: it’s made with almond milk.