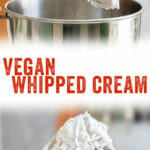 Looking for a light and fluffy topping for all your vegan desserts? You’ve come to the right place! This vegan whipped cream is pillowy, creamy goodness: and it takes 3 ingredients and no time at all to whip up. While Alex and I don’t eat a fully plant based diet, we eat about 90% vegetarian and vegan recipes. And when it comes to desserts, we wanted something to top our vegan dessert recipes! We’ve been making this vegan coconut whipped cream for years and realized that you might want to make it, too! Here’s our recipe: and bonus: it’s naturally sweet with no refined sugar!

How to make vegan whipped cream

What’s vegan whipped cream made out of? It’s not surprise that it is…drumroll…coconut milk! Coconut features prominently in vegan dessert recipes, from coconut oil to coconut milk. We use coconut milk as the basis for all our vegan ice cream recipes (I’ll link to all of them below). And we use coconut oil as a substitute for butter in our vegan dessert recipes like this strawberry crisp or this bananas foster. So it’s no surprise that coconut is the magic behind vegan coconut whipped cream.

How to make vegan whipped cream

What does vegan whipped cream taste like? We will admit, it does have a coconut-y vibe (so if you’re not a coconut person, steer clear!). But we think the coconut adds just the right complexity in flavor! I barely notice the coconut , but maybe it’s because I’m used to it. Either way, we think you’ll love it. Let us know in the comments.

Desserts to serve with this vegan whipped cream

Ready to eat? Here are our favorite vegan desserts that go perfectly with a dollop from this recipe:

Coconut for the win! As I mentioned above, many of our vegan desserts on this website use coconut oil or coconut milk to stand in for the dairy that would be in traditional desserts! Here are a few of our very favorite tricks for vegan desserts using coconut:

Looking for a stand mixer?

Looking for a great stand mixer to make whipped cream, breads, and so forth? We use this Copper KitchenAid Stand Mixer, and we love it. It’s perfect for making this recipe and we use it all the time for pizza dough! And another perk: it looks beautiful in the kitchen!

Get it: Copper KitchenAid Stand Mixer

This vegan whipped cream recipe is…

*Want to try it with a boozy twist? Head to our Infused Alcoholic Whipped Cream for how to infuse whipped cream with bourbon, rum or kahlua.